The Negroes are about to cause us trouble. The Negroes have made us a great deal of trouble. . . . The anatomical structure of the Negro is inferior. The lean shanks, the prognathous profile, the long arms (which do not always exist) the black skin, the elongated and oblique pelvis — these are all characteristics in which, so far as the Negro diverges from the White man, he approximates the African apes. . . . I am not responsible for the inferiority of the Negro. I am responsible if I ignore the facts. I am culpable if I hold him to the same standard as the White man. My appeals to him must be of a widely different character from my appeals to the Aryan, Hindu, or the Mongoloid American savage. The ethnological facts have their applications in all missionary efforts.

So said Alexander Winchell in 1878. Soon afterwards, he was compelled to leave his post at Vanderbilt University, but not for the reason that a professor, in the wake of such remarks, might be asked to resign from an American university today.

From Sketches of Creation by Alexander Winchell

Winchell was born in 1824 in New York. He was bright enough to complete his studies at Stockbridge Academy in Massachusetts at the age of 16. Perhaps he simply planned to pass some time until he was old enough to start medical school, but the young Winchell fell into teaching. He taught at a few seminaries, then became the president of Masonic University in Selma, Alabama. Quarrels with colleagues may have been the reason he had to resign. He apparently left Syracuse University under similar circumstances. He probably wasn't known for his ability to get along well with others, but he was known as a capable geologist and teacher.

Winchell was also a writer. In 1870, he published Sketches of Creation. Aimed at a popular audience, the book gave an overview of the history of life on Earth. To a modern reader, Sketches is a perplexing mix of eloquent arguments in favor of sound science, and a strange conflation of science and theology.

Does any one hesitate to admit that an oak has undergone a slow and regular "development" — or that the delta of the Mississippi is undergoing "development" — or that the cone of Vesuvius is undergoing "development"? If it appear to intellects of the loftiest and broadest grasp that the Creator has evolved the solar system according to a method, and by the use of natural laws, exactly as he evolves a tree from the germ in the seed, why do we charge atheism in the one case and not in the other?

From Sketches of Creation by Alexander Winchell

Winchell gently explained to his readers — as at least a couple generations of capable geologists had before him — that Noah's flood couldn't explain all the layers of fossils embedded in mountains. He gave vivid descriptions of our exotic planet long before people lived on it, when the roly-poly trilobite scurried across the sea floor, and the giant frog-like Labyrinthodon lumbered over land. But throughout, he insisted that all the mountain building, mountain eroding, rising and sinking continents, creeping glaciers and, perhaps most important of all, deposition of oil and coal deposits, had been overseen by a creator taking the long view to prepare the planet just for us. And we humans were, he insisted, quite something. In a chapter asking "Will there be an animal superior to man?" Winchell argued:

Consider, lastly, man's erect attitude. When the fish, the earliest representative of the type which embraces man, was introduced into the waters of the Devonian seas, the vertebral axis was hung in a horizontal position, and the animal was not endowed with even the power to raise the head by bending the neck. . . . Man first and along assumed a perpendicular attitude, and turned his countenance toward heaven, and talked with the Being who formed him. . . . It is evident no farther progress can be made in their direction. The elevation of the spinal axis has reached a mathematical limit; the consummation of organic exaltation is attained.

There was a practical if not genuinely spiritual reason for Winchell's frequent professions of faith. In the 1870s, Vanderbilt University expected its faculty members to adhere to scriptures. Failure to be a fundamentalist could get one fired. To reassure his readers, perhaps to hang on to his job, Winchell proclaimed his faith throughout the book. On the topic of evolution, he rejected Darwinism, but perhaps didn't quite avoid using the world "evolution" either.

Thus, on a review of the history of organic life, we are enabled to draw forth its manifold lessons. We learn that the marshaling of its forms is not in such an order as to justify the fascinating doctrine of genealogical succession, as taught by De Maillet, St. Hilaire, Lamarck, Darwin, Spencer, and others. Still, we learn that order has existed, and that Nature's history may be expressed in formulas. We recognize a bond of thought running through the whole length of creation, and feel the assurance that a Higher Power than physical forces has presided over the evolution of the material world.

Sketches and some of his other writings spurred a whispering campaign that he was an evolutionist, an accusation that appeared answered by the fact that he was a regular churchgoer. But he tested Vanderbilt's flexibility too much in 1878 with the publication of Adamites and Preadamites: or, A Popular Discussion. After making the case of the inferiority of Africans, along with curious arguments that Dravidians were descendants of the same Adam, but not of Noah, Winchell unloaded his bombshell. 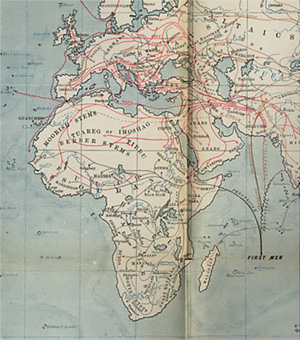 Winchell's Preadamites featured a foldout map of human races and their subgroups with considerable taxonomic specificity: Negroes, Australians, Hottentots, Papuans, Asiatic Mongoloids, Polynesian Mongoloids, Dravida, Hamites, Semites and Japhethities. From "Cultural Politics and the Racial Cartographics of Human Origins" by David Livingstone in Transactions of the Institute of British Geographers.

If human beings have existed but 6,000 years, then the different races had separate beginnings, as Agassiz long since maintained — each race in its own geographical area. . . . If the same Adam must be regarded as the progenitor of the Black races, then these races represent a wide-spread degeneracy, which is not only vast and appalling, but must be pronounced eminently improbable.

He further explained that nature had mercifully ushered the inferior dark races into the interior of a vast, impenetrable continent, to shield those unfortunates (and everybody else) from mingling. He felt it all fit nicely with the "natural law" of "mutual repugnance of the races."

Sub-Saharan Africans, Winchell insisted, could not have arisen from the same Adam as respectable people like himself and his readers. Black people must have had their own Adam. In short, Winchell argued for polygeny. Polygeny was not new. It had been promoted in an anonymously authored Latin book published in Paris in 1655. But while Winchell's casual conviction of the inferiority of the Negro was totally acceptable, his belief in multiple human origins was not. It suggested he was an evolutionist after all.

Science historian David Livingstone has argued that what truly outraged Winchell's contemporaries was his argument that the Adam he proposed for sub-Saharan Africans would have predated the Adam for white people. In other words, people of color walked the globe first. If that was the real source of trouble, then for all his own bigotry, Winchell just might have managed to offend even bigger bigots.

His departure from Vanderbilt was followed by a noisy fight in newspapers, but the university didn't take him back. The defiant Winchell expanded his Preadamites argument in a longer book, published in 1888.

Teaching in Tennessee as America's first Jim Crow laws were being written, Winchell was a product of a society that was as racist as it was pious. It's easy to sneer at Winchell, but he was no worse than plenty of his contemporaries, evolutionist and fundamentalist alike. Evolutionist Ernst Haeckel had divided humans into a dozen different species, just as great-chain-of-being creationist Charles White had juxtaposed "low" humans with "high" apes. Decades after Winchell's death, Roy Chapman Andrews, perhaps the real-life inspiration for Indiana Jones, would write about the "unequal progress" of different races in Meet Your Ancestors.

Almost a century would elapse between Winchell's polygenist pamphlet and the Civil Rights Act. In between, there would be more Jim Crow laws, more segregation, eugenics movements at home and abroad, and even rallies insisting that "race mixing is communism." Odious as his racial reasoning was, he wasn't alone.