Although he had little formal education, Charles Doolittle Walcott headed three of the most important scientific institutions in the United States: the U.S. Geological Survey, the Smithsonian Institution and the National Academy of Sciences. He was also a founding director of the National Advisory Committee for Aeronautics, the forerunner of NASA. He was well connected and on a first-name basis with several U.S. presidents. He was so skillful at persuading fellow residents of the District of Columbia to do what he wanted that he earned the nickname Snowshoe Charlie, meaning he didn't even leave any tracks.

From Cradle of Life by J. William Schopf

To understand the importance of Walcott's contributions to paleontology, it helps to understand the history of the earliest life forms on Earth. The Earth is estimated to be 4.6 billion years old. Geologically speaking, life likely evolved here pretty quickly — more than 3.5 billion years ago. Yet life remained microscopic probably for most of Earth's history. Even though the life forms were single-celled, they frequently formed colonies, the most common being stromatolites. Stromatolites, consisting of layer upon layer of single-celled organisms, were the dominant life form on Earth for hundreds of millions of years.

Although some scientists have theorized that multicellular life forms evolved as much as a billion years ago, the first multicellular life forms found in the fossil record lived about 600 million years ago. The fossil record shows a major diversification in the Cambrian Period, beginning about 542 million years ago. Cambrian fossils are the first to show many of the features we take for granted today: heads, eyes, mouths and legs. (The advent of mouth-bearing organisms meant the end for most stromatolites, which had no defense against them. Only a small number of stromatolites survive today.) So dramatic was the record of evolution during the Cambrian that it has been nicknamed the Cambrian Explosion (a controversial term, though, that not all paleontologists support), and Earth's history prior to this time (about 85 percent of the planet's life span) is often described simply as the Precambrian.

Trilobites, ancient marine invertebrates related to the modern horseshoe crab, have been found in abundance since the 17th century. Growing up during the Civil War, when farm labor was in short supply, Walcott worked as a farm hand near Trenton Falls, New York. The Trenton limestone was rich in fossils, particularly trilobites. Walcott eventually assembled a collection impressive enough to sell to the naturalist Louis Agassiz.

Trilobites show up in the fossil record starting in Cambrian rocks, but their fossils usually consist only of shells. Trilobite shells are rich in calcite, meaning they were practically fossils before the bugs wearing them molted or died. Trilobite legs, not so much. For decades, scientists hunted in vain for the remains of their legs. One of Walcott's early achievements was to describe trilobite legs, through a series of hand-ground cross-sections. At right is his first depiction, later to be refined. He studied stromatolites, originally named Cryptozoon. He discovered Chuaria, which he believed to be small compressed shells. His identification was wrong — Chuaria turned out to be unusually large single-celled planktonic alga, and the first preserved Precambrian cellular organisms to be discovered.

Probably the best known of Walcott's finds, however, was the Burgess Shale, which he first examined in 1909. This fossil locality preserved a then-unprecedented diversity of Cambrian fossils. In fact, a representative of the Geological Survey of Canada, Richard McConnell, found trilobites there in 1886, but it was Walcott who stumbled upon most of the remarkably weird fossils, and who returned year after year for more. By 1917, he had collected roughly 65,000 fossils from that site. 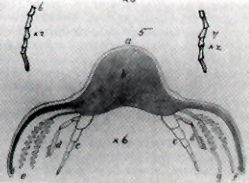 From Trilobite! Eyewitness to Evolution by Richard Fortey

The process of fossilization usually preserves only hard parts, such as bones in vertebrates, and exoskeletons in invertebrates. Something about the fossilization process in the Burgess Shale preserved soft parts too, and gave paleontologists a rare look at ancient life. (Newer discoveries have turned up similarly rich fossil sites from the Cambrian in other parts of the world.) Cambrian organisms include some of the oddest life forms known to science, such as Hallucigenia with about 20 tentacles on one side of its worm-like body, and seven pairs of sharp spines on the other side. Another weird creature is Opabinia, with a Hoover-like extension on its head and five eyes. Other seemingly more conventional animals also evolved during the Cambrian, like the ubiquitous trilobite.

The sudden appearance of so many diverse life forms without apparent ancestors puzzled Charles Darwin, who suggested that the rock record prior to the Cambrian had been poorly preserved, and Walcott supported this view. But more recent examination of the geology indicates that the rock record is fairly well preserved, as are some Precambrian fossils. Debate continues, but many paleontologists agree that something significant happened in the Cambrian — the fossil record shows the emergence of hard skeletons, more complex behavior (seen in trace fossils like worm burrows) and all the major body plans existing today. Suggested causes of this rapid diversification include changes in ocean chemistry or oxygen level, or even the end of a major ice age.

A serious reexamination of the Burgess Shale fossils began in the 1960s, spearheaded by the Geological Survey of Canada. Part of the Survey's motivation for was to build up a fossil collection in Canada, as Walcott's finds resided at the Smithsonian. Harry Whittington, who oversaw much of the research, had trouble fitting some of the weird creatures into living groups. When, at a conference in 1972, he showed five-eyed, rudder-tailed, Hoover-hosed Opabinia reconstruction, the audience laughed. Paleontologists have since stopped chortling. 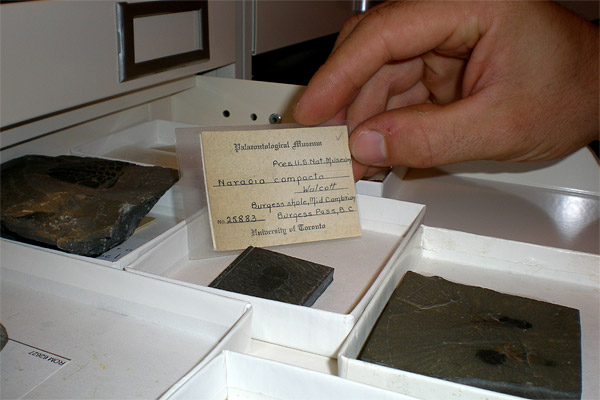 A fossil presented by C.D. Walcott to the University of Toronto, in the Burgess Shale collection at the Royal Ontario Museum in Toronto. Photo by Michon Scott.

Whittington and others eventually overturned several of Walcott's original identifications. A few paleontologists, such as Stephen Jay Gould, even criticized Walcott for "shoehorning" fossils into modern groups, but other paleontologists have argued that his attempts to relate the Burgess Shale fossils to modern groups was a more enlightened approach than simply writing them off as problematic, unaffiliated life forms. And while Walcott's identifications have not fared well, paleontologists have also backed away from the "weird wonders" hypothesis promoted by Gould. Further study has, in fact, fit many Burgess Shale fossils into modern groups, such as arthropods, annelids and mollusks.

Even when criticizing Walcott, Gould expressed sympathy for the daunting task of identifying such old and unfamiliar life forms, and for the difficulties Walcott faced in his personal life. He lost his first wife as a young man, and his second wife (and mother of his children) in middle age. Not long after his wife died in a train crash, Walcott lost a son to tuberculosis. All this happened more or less at the height of his Burgess Shale excavation and study. After both deaths, the surviving family members regrouped in the Walcott Quarry and dug for fossils.

Modern paleontologists remain impressed by Walcott's work, including Richard Fortey, who remarks that amazing discoveries by Walcott became such a common occurrence, and he reported them in such an unassuming fashion, that one could imagine him entering into his journal, "Found Holy Grail this a.m.; have expectations of Excalibur tomorrow."