"It's called a Polypus." — "What's that?" — "A creature,
The wonderful'st of all the works of nature;
Hither it came from Holland, where 'twas caught
(I should not say it came, for it was brought);
Tomorrow we're to have it at Crane-court
And 'tis a reptile of so strange a sort,
This if 'tis cut in two, it is not dead;
Its head shoots out a tail, its tail a head;
Take out its middle, and observe its ends,
Here a head rises, the a tail descends;
Or cut off any part that you desire,
That part extends and makes itself entire . . ."

Charles Hanbury Williams penned this biting verse in the 18th century, to mock aristocratic pastimes, namely cutting up tiny freshwater polyps and watching the severed parts regenerate. The animals' weird capacity had been discovered by Abraham Trembley, a private tutor working for the Count of Bentinck. 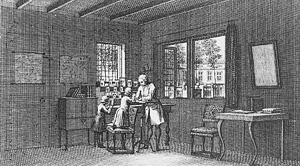 Born in 1710 in Geneva, Trembley studied theology, philosophy, and calculus before moving to Holland and becoming a tutor to the Count of Bentinck's boys. In the early 1740s, the count and his wife were in the midst of a ugly divorce. The husband spent most of his time conferring with lawyers at The Hague, the wife had left town with her lover, and the tutor aimed to give the count's two small sons some stability. He taught them to read and write, and distracted them from their parents' ongoing battles by engaging them with nature. The count commissioned idealized depictions of the tutor and his students, one of which appears here.

The tutor and his charges collected bugs and peered at them through microscopes. They also collected what they thought were plants, bringing them home inside jars of ditchwater. But Trembley found the "plants" puzzling. Looking like tufts of grass or dandelion fluff drifting in the water, they seemed plantlike enough, but their tendrils moved, and they migrated back to sunlight when they had been moved away from it. One day, the boys told Trembley that they saw the plants walk like caterpillars across the jar.

Trembley thought there was one sure way to settle the matter. If the tufts were plants, they could survive being cut in two, or at least one half would survive. Animals would die. He recounted:

It was on the 25th of November 1740 that I cut the first polyp. I put the two parts in a flat glass, which only contained water to the height of four or five lignes. It was thus easy for me to observe these portions of the polyp with a fairly powerful lens. . . . The instant that I cut the polyp, the two parts contracted so that at first they only appeared like two little grains of green matter at the bottom of the glass. . . . The two parts expanded on the same day on which I separated them. . . . I saw it move its arms; and on the next day, the first time I came to observe it, I found that it had changed its position; and shortly afterwards I saw it take a step.

Like a plant, the polyp had survived being cut in two. Like an animal it moved. Like a carnivorous animal, it ate other animals. Trembley wrote:

I saw the parts walk, take steps, mount, descend, shorten, lengthen, and make so many movements which up to the time I had only seen made by animals. I did not know what to think.

Then the severed polyp parts proved even more amazing. Several days later, they regenerated their missing portions. Where there had been one polyp there were now two, and a week after the pieces started to re-grow, the two new polyps were indistinguishable from each other.

Trembley must have realized he had made a big discovery, because he contacted an eminent French professor, René Réaumur, with the news. He followed up a letter with specimens so the experiment could be replicated, but the polyps suffocated en route. Trembley sent new specimens with a cork rather than wax sealant. Réaumur saw the same results Trembley did.

Not long afterwards, English scientists wanted to see if they, too, could replicate the results. The president of the Royal Society, Martin Folkes, was skeptical. Trembley was, after all, just a private tutor, and his experiment witnesses were, after all, just boys. After Trembley sent a container of polyps to England, and after the Royal Society saw the same regeneration that the tutor had — complete with about 150 witnesses — Folkes sent a belated but gracious apology, and congratulated Trembley on his discovery.

In sending polyp specimens to others so they could replicate his results, Trembley became something of an expert in the transport of these tiny, delicate creatures — so much so that he eventually complained of having time for little else. His inventiveness was not limited to transporting items; he also developed a flexible arm for aquatic microscopes, enabling him to observe the diminutive subjects from any angle.

Trembely started out trying to make learning about nature fun for his small students. Then he tried to establish whether tiny green things in ditchwater were plants or animals. In a development that is probably as puzzling to the modern mind as the polyps were to Trembley, the small animals' regenerative powers prompted anguished speculation about the place of humankind in the universe, and the nature of the soul.

Though they were not believed to possess rational, immortal souls like humans, animals were nevertheless assumed to have souls, and in the 18th century, souls were a consuming topic. So what did one animal able to turn into two animals mean? Did each inherit half a soul? A whole soul? Even more unsettling, if these lowly creatures could regenerate missing parts — a feat that any person who had lost a limb would surely find useful — why hadn't God bestowed the same feature on people? Were we not the pinnacle of Creation? Trembley studiously avoided engaging in the metaphysical debate his research implied. He was happy to keep sending polyp specimens and write his memoirs.

More than three centuries after Trembley's birth, the philosophical wrangling over regeneration and souls has dimmed, but these tiny polyps, today known as Hydra, continue to fascinate. In a paper published in 1998, Daniel Martínez described them as "potentially immortal." Seventeen years later, he and coauthors cited the organism's high proportion of stem cells, rapid cell turnover, and simple body plan for its apparent imperviousness to the passage of time. The findings weren't idle musings; they were based on 3.9 million days of observing individual Hydra, some as old as 41 years. Hydra fall into the animal phylum cnidaria, and members of this group include sea anemones, corals and jellyfish.