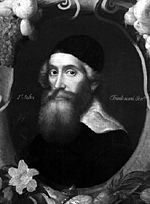 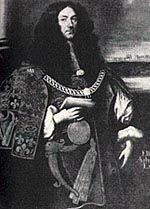 From Mr. Wilson's Cabinet of Wonder by Lawrence Weschler

In the early 17th century, those who glittered in Europe took care to pay a visit to the remarkable collection assembled by John Tradescant the Elder (shown in the cap). Even though he was a commoner, his cabinet of curiosities was a must-see for the rich and powerful, but he didn't limit his collections to viewing by the elite; for a small fee he allowed members of the public to see it, too.

Little is known about Tradescant the Elder before his marriage in 1607, when he was about 30. A skilled and sought-after gardener, Tradescant the Elder worked for some of England's most powerful people, including Robert Cecil (son of Elizabeth I's advisor) and King James I. Tradescant's gardening work took him as far from home as Russia. His son, John Tradescant the Younger, traveled a great distance in the opposite direction, namely Virginia. (He was there collecting plants when his father died.) Father and son planted and maintained a botanical garden in Lambeth, today a highly urbanized part of London, with exotic vegetables the Younger collected overseas. They also assembled a collection of curiosities whose contents ranged from fruit-stone carvings to sketches of specimens from a papal menagerie. Other (alleged) goodies included two whale ribs, a mermaid's hand, a mummy's hand, part of a vegetable lamb known as a "Barometz" (in actuality the root of an Asian fern now named Cibotium barometz), crocodile eggs, seahorses, a lion head, a "natural Dragon, above two inches long," a banana, a bit of wood from the cross on which Christ was allegedly crucified, and fossils.

The collection's diminutive fruit stone carvings (shown here, roughly actual size) exhibited remarkable detail. According to a catalog of the collection, one fruit stone showed a nicely dressed man tuning a viol against a Flemish background on one side, and on the other side, it showed an assortment of animals: camel, horse, donkey, dog, boar, bull, bear, lion, stag, squirrel, goat, lynx, assorted birds, a monkey riding an elephant, and a bunch of bunnies. All on one fruit stone. Another other fruit stone showed a crucifixion scene.

The Tradescants enlisted others in their search for colorful and curious oddities. In one letter to the secretary of the navy, in pre-standardized English, Tradescant the Elder listed items he would very much like to acquire, such as an "Ellophants head with the teeth In it very large" and "All sorts of Serpents and Snakes Skines & Espetially of that sort that hathe a Combe on his head Lyke a Cock," not to mention "Any thing that Is strang."

An astrologer, alchemist, and royalist who enjoyed changing fortunes during the tumultuous years between the English Civil War and the restoration of the monarchy, Ashmole had fairly modest beginnings, but improved his prospects by marrying well (twice). He later recounted with some glee his encounter with the freshly restored king, who "lookt upon me as an Honest man and would take care of me as an Honest man." Ashmole certainly didn't suffer from false modesty. According to some historians, he didn't suffer from very many scruples, either. 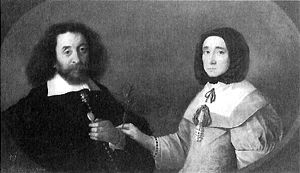 From Mr. Wilson's Cabinet of Wonder by Lawrence Weschler

Tradescant the Younger made arrangements that, after he died, Ashmole would receive the collection, but at some point, Tradescant the Younger and his wife Hester evidently began to have misgivings. Accounts vary as to what transpired between the parties, some accounts claiming that Ashmole charitably offered to revoke the deal, others saying the lawyerly Ashmole had written a water-tight contract the Tradescants couldn't revoke without his consent. Accounts mostly agree that once Tradescant the Younger died, relations between Ashmole and Hester Tradescant quickly descended into acrimony. By that time, Ashmole had moved in next door to the Ark. Tobias Churton, author of The Magnus of Freemasonry and Elias Ashmole — A Mighty Good Man describes Hester as having "lost her marbles" with respect to Ashmole. Regarding her claim that Ashmole had cut a hole in the wall dividing their properties so he could come and go as he pleased and remove her belongings, Churton observes, "Freudians could doubtless make something of that." Meanwhile, Ashmole accused Hester Tradescant of causing his own home to be robbed, claiming that her compost heap had enabled thieves to climb over the wall into his garden and make off with 32 of his roosters and hens, and "he lay in abject fear night after night lest his house be broken into." Precisely what Freudians might make of this is uncertain.

Ashmole's vexation with Hester Tradescant was doubtless caused in part by her practice of selling off bits of the Ark after her husband's death. With little or no means of support, she might have been forced to sell some pieces in order to survive. Ashmole's troubles with the widow came to a quick end, however, when she ended up face down and dead in a shallow pond on her own property. The strange circumstances of her death were quickly forgotten and Ashmole got the collection.

After acquiring the Tradescant Ark, Ashmole cut a deal with Oxford to house the collection, and to construct a special building for it. In 1675, Oxford agreed, and the result was the Ashmolean (not Tradescant) Museum. Ashmole intended to contribute his own collection as well, of coins, medals, and seals, but a fire ate his collection in 1679. One item he did manage to contribute, which long outlasted ephemera such as the mermaid's hand, was a bestiary. The Ashmole Bestiary is still in the collection of the Bodleian Library at Oxford.

Compared to other collections, the specimens initially housed in the Ashmolean Museum were unremarkable, but this museum had a significant innovation: its criteria for admission. To explore a cabinet of curiosities in the Renaissance or Enlightenment, you typically had to know somebody. But anybody who could scrape together sixpence — about the price of a pound of butter — could see the Ark's goodies. The egalitarian admission practice started by the Tradescants continued at the Ashmolean Museum. Continental Europeans were shocked to learn that even "country folk" who could pay admission were allowed in.

Visitors could not just see the objects on display but apparently handle them as well, whether or not they were supposed to touch anything. Museum minders were shrewd enough to prevent people wandering in and out of the gallery as they pleased, instead admitting groups and shutting the door behind them. It was a wise precaution considering some of the objects on display were gold coins. Still, the incessant handling was hard on the natural specimens, many of which were ruined by the 18th or 19th century, including the stuffed Dodo.

In the centuries that followed the establishment of the Ashmolean Museum, the collections enjoyed varying levels of care from museum curators. Eventually the collections were broken up, some ending up in Oxford's natural history museum, and some in the Bodleian Library. But for all the collection's shortcomings and misfortunes, the Tradescants and the often quarrelsome Ashmole helped found one of the world's first truly public museums.