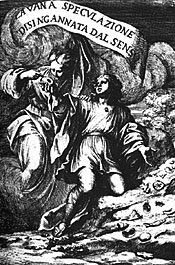 From The Meaning of Fossils by Martin J.S. Rudwick

I have no idea how the sea could reach so far into the land; I do not know whether this happened during the universal Deluge or during other special floods. . . . I do not know, neither do I know the way to find out. Nor do I care. What I do know is that the corals, the shells, the sharks' teeth, the dogfish teeth, the echinoids, etc., are real corals, real shells, real teeth; shells and bones that have indeed been petrified.

These words, written by Agostino Scilla in his 1670 book Vain Speculation Undeceived by Sense stood in defiance of the conclusions shared by the very influential Jesuit Athanasius Kircher, who believed that some fossils were formed as sports of nature. Scilla likewise refuted the ideas of Maltese naturalist Giovanni Francsco Buonamico, who shared Kircher's ideas, though Scilla and Buonamico were always on friendly terms. In fact, Vain Speculation started as an unillustrated letter to Buonamico. At the time, Scilla belonged to the Accademia della Fucina, which offered to pay for the publication of the letter. Scilla not only wrote about fossils, he also illustrated them with consummate skill.

Like Niels Stensen did a few years earlier, Scilla discerned the origin of glossopetrae (also known as tongue stones, also known as shark teeth), remarking that they were made "not in the terrain of Malta but in the mouth of a living animal." Whereas Stensen delved deeper into how rock layers formed, Scilla focused more closely on how fossils themselves formed.

Scilla was born in 1629, in Messina, Sicily. His father was a notary, and Scilla enjoyed good training from accomplished artists at an early age. When just a teenager, he went off to Rome and apprenticed for five years under a classical painter. But he didn't live a continuously charmed life. His participation in a failed revolt against Spanish rule forced him into exile, so he wound up living in Turin and then Rome, where he had earlier received an education. His artistic training (Charles Lyell praised his work more than a century after Scilla's death), as well as his long-term interest in coin collecting likely helped his studies of fossils. He had a practiced eye and gave considerable thought to how fossils formed. 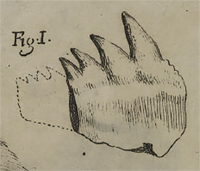 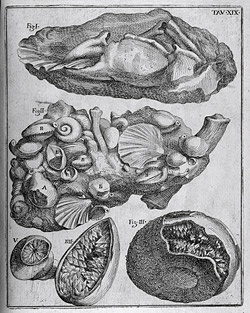 From "Agostino Scilla: A Baroque Painter in Pursuit of Science" by Paula Findlen

Scilla also brought multiple innovations to the depiction of fossils in Vain Speculation Undeceived by Sense: multiple views of the same fossil, pictures of fossils embedded in rock and, though it might seem insignificant, dotted lines. Science historian Paula Findlen writes, "No one had ever drawn a fossil before by projecting the missing part." He used the innovation to persuade his readers that, for instance, a shark tooth belonged to a row of shark teeth.

Naturalists in Tuscany, Sicily and Malta were enthusiastically debating the nature of fossils in Scilla's day, exchanging letters, specimens and explanations. The same problems that plagued many naturalists of the time were at work here. Fossils might be well preserved, but they didn't necessarily have living analogues, at least not in the same vicinity. Shark teeth might be common fossils, for example, but sharks in this region were relatively rare. Sand dollars and sea urchins were rare enough that naturalists couldn't easily compare echinoderm fossils to their modern counterparts. Scilla deserves admiration for the insights he reached despite these setbacks, particularly for his recognition that fossils were often not complete animals but animal fragments.

That he rejected Kircher's notions of fossils as nature's big joke didn't mean that Scilla necessarily had a modern understanding of geology. He rejected the claim that God changed snake tongues into glossopetrae because he didn't think that particular "miracle" had been sufficiently proven, but that didn't mean he rejected miracles altogether. Scilla believed that fossils were probably deposited by the Noachian flood, though he suggested there might have been a series of floods. This suspicion was far from the findings of today's science, but the notion of a series of events brought Scilla closer than many of his contemporaries to understanding how fossils were formed and deposited in rocks.

On the cover of Scilla's book, Sense holds a fossil shell and gestures toward an outcrop of similar organisms to make the point. The fact that the fossils include a shark tooth and echinoid — easily recognizable fossils if well preserved — helps Sense's case. At that time, a few other sharp minds, including those of Stensen, John Ray and Robert Hooke, reached similar conclusions about the organic nature of fossils.