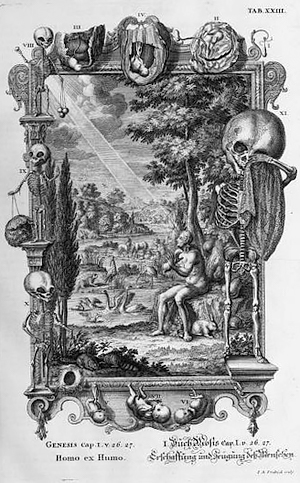 From Scenes from Deep Time by Martin Rudwick

Johann Jakob Scheuchzer was a Swiss naturalist with a wide breadth of knowledge — at least for the early 18th century. In his day, it was customary to regard the Old Testament as an accurate description of the history of the Earth, and Scheuchzer was certainly a man of his time.

In fact, as historian Jonathan Sheehan argues, Scheuchzer and his contemporaries struggled with "information overload" as discoveries about the natural world threatened to overwhelm scholarship. Using the Bible as a basis for ordering information made it more manageable. And use the Bible Scheuchzer did; he relied on biblical passages to discuss chickens and their eggs, mushroom shapes, plant structures, ants, rainbows, even the social lives of ants.

Trained as a physician, Scheuchzer traveled extensively and put together one of the largest fossil collections in early 18th-century Europe. He described many of the fossil plants he collected in 1709 in Herbarium of the Deluge. He believed the plants had all perished in the biblical flood, and his book was among the first devoted to that topic. His well-illustrated book continued to be consulted throughout the 19th century.

Fossil plants, however, were small potatoes compared to what he found in 1725. That year, he examined what he believed was the fossil of a human flood victim, a 4-foot-long vertebrate skeleton found in the Ohningen quarry near Lake Constance. Scheuchzer named it Homo diluvii testis.

Early on, there were skeptics of Scheuchzer's description. In 1758, another Swiss naturalist, Johannes Gessner, questioned Scheuchzer's interpretation and suggested that the "flood victim" was a large fossil fish. The matter was settled in 1811 when the great comparative anatomist Georges Cuvier cleaned the specimen. He pronounced it a giant salamander. The fossil is now understood to date from the Miocene Epoch, roughly 23.5 to 5.3 million years ago, long before humans evolved.

Ironically, before his own mistake, Scheuchzer accurately cast doubt upon other "flood relics" commonly displayed in churches. Many of the relics were just pieces of stone that resembled human bones, or teeth belonging to elephantine animals. In addition to his large salamander, however, he erroneously identified vertebrae from large fish as human remains.

By the time Cuvier resolved the status of Homo diluvii testis, Scheuchzer had left behind a substantial body of biblically based work. In 1731, he published a description of the alleged victim in his masterwork: Sacred Physics, which recounted the formation of the Earth and the creation of all life along with the deluge. (The creation of man appears above.) Based on the 1611 King James Bible, the four-volume set including a whopping 761 copperplate engravings. (Part of the reason the work could involve so many illustrations was because Scheuchzer borrowed heavily from other sources, but many of the engravings were original.) Next to each engraving were multi-lingual biblical verses; Sacred Physics was published in Latin, German and French. Besides illustrating inspiring snippets from Genesis, Sacred Physics explored practical matters, such as the construction of the Tower of Babel. Scheuchzer concluded, perhaps admirably, that the tower couldn't have reached "the heavens" — however he defined that — because a tower that tall would have required some 50 times all the building material that could be extracted from the Earth. He also argued that completing the work would have required a 12-year effort from one-fifth of the human population then living on Earth, precisely 1,763,128 laborers.

Although he embraced much of the pseudoscience of his day, Scheuchzer books included exquisite illustrations, and he adopted an innovation of the time from the naturalist Agostino Scilla: dotted lines to show missing bits of fossil fragments. 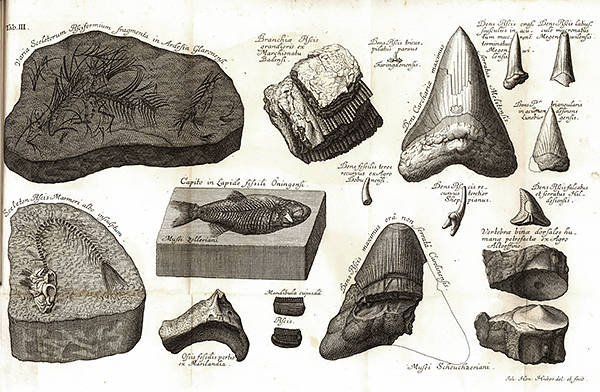 Another of Scheuchzer's works was Complaints of the Fishes. This pamphlet playfully relayed the grumblings of fish killed by the flood brought on by humanity's sins. (Considering fish can swim, how a flood would have killed them is a little puzzling. Maybe the floodwaters were really low in oxygen.) Part of the pamphlet's aim might actually please modern paleontologists; it was to defend the fossils' status is evidence of earlier life, as opposed to inorganic formations which some savants believed the fossils to be. Scheuchzer actually encouraged naturalists to see fossils not just as the remains of former organisms, but more importantly as Noachian flood relics.