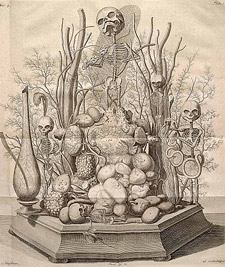 From "Frederik Ruysch: The Artist of Death" by Luuc Kooijmans in Public Domain Review

In 1697, a young Russian visited the very cosmopolitan Amsterdam. Although he had plenty of money, he chose to live simply — dressing as a dock worker and walking wherever he needed to go, rather riding in carriages — to blend in. It didn't work. He was 6'7", and anybody who knew anything knew perfectly well he was Czar Peter the Great.

When Peter the Great sought to modernize Russia, he didn't just order his advisors to cut off their beards and wear Western dress. He also printed books, established schools and built up his own cabinet of curiosities, which he opened to the public. In assembling his collection of weird wonders, Peter decided that it had to include displays put together by the amazing Dutchman Frederik Ruysch, who had figured out how to preserve body parts so they would last.

In the days before refrigeration, matrons and cooks weren't the only ones who struggled to ward off decay. The same process that spoiled food also destroyed human and animal bodies so quickly that anatomists and scholars rarely had a chance to understand how those bodies worked. Savants had to find a way to preserve internal organs long enough to study them thoroughly. The solution involved injecting organs with substances that would harden and preserve them. Anatomists experimented with substances like mercury, milk, wax, resin, talcum, and assorted inks and pigments. They also soaked body parts in alcohol. The 17th-century savant Jan Swammerdam pioneered this sort of preservation, but his contemporary Ruysch outdid him — and jealously guarded his own preservation secrets.

From Human Anatomy by Rifkin, Ackerman and Folkenberg

Ruysh devoted some 30 years to perfecting his hardening and preservation agents, sometimes using white wax, and adding an even more lifelike appearance with red wax. Many of his specimens survive today in a substance he called liquor balsamicus, a clear liquid aimed at preserving specimens' color and flexibility. Even now, preserved fetuses still wear tiny lace caps sewn specially for them by Ruysch's own daughter.

After Ruysch's specimens caught the eye of Peter the Great (who was rumored to try to kiss one of the embalmed infants), the Dutchman ended up selling his entire collection of hardened body parts to the czar. While Peter greatly admired Ruysch's work, reactions in the czar's court were mixed; Russians of the time didn't take too kindly to dismembered human bodies on display. Current descriptions of the collection likewise warn that the items are "not for the faint of heart," and the Dutch crown prince Willem Alexander was kept away from the specimens when he visited around the turn of the 21st century.

This wasn't the only time Ruysch would sell a collection. He lived to the age of 93 and had plenty of time to start collecting all over again. His death presented his widow with yet another collection to be auctioned off. 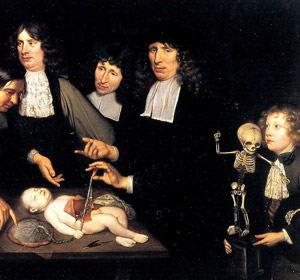 From "Frederik Ruysch: The Artist of Death" by Luuc Kooijmans in Public Domain Review

In between hardening bodily organs, Ruysch kept busy with other pursuits. He taught anatomy for more than five decades to both surgeons and midwives. In 1683, Jan van Neck painted Ruysch at work, and a detail of that painting appears here. When the Amsterdam Botanical Garden opened in the late 17th century — bolstered by specimens brought from the New World and Africa, thanks to the Dutch East India Company — Ruysch accepted a post as the Garden's Professor of Botany.

"Frederik Ruysch might have been considered slightly odd in any society," Judith Folkenberg writes in Human Anatomy, "but his preoccupations would have seemed far more natural in baroque Holland than they would in today's world, where he might uncomfortably remind people of the villain in a Thomas Harris thriller." The sculpture shown on this page poses fetal skeletons on a rocky landscape comprised of gall, kidney, and bladder stones. The treelike structures are hardened blood vessels. To punctuate the sculpture's message of life's fleeting nature, the tiny skeleton in front holds a mayfly, believed to survive in its adult form for only a single day. The hilly landscape they occupied may have symbolized the Greek godly home of Mount Parnassus, a recurring theme in late Renaissance art. In another of Ruysch's sculptures, tiny skeletons wept over life's fleeting nature using human tissue as handkerchiefs. Naturalist Maria Sybilla Merian visited his curiosity cabinets, and his vanitas theme about the emptiness of Earthly life was said to influence her later work.

Many of Ruysch's sculptures featured female reproductive organs — a choice that might strike a modern viewer as a touch misogynistic. Yet Ruysch's nurturing of his own daughter's abilities argues otherwise. Once she began showing artistic talent, he sent her to study with an expert still-life painter. She later specialized in "forest floor" paintings arranging exotic specimens from all over the world in what appeared to be a "natural" arrangement on the ground. The training paid off. Ruysch's daughter was awarded membership in a painters' guild in the Hague, and even given a royal appointment as court painter to the Elector Palatine in Dusseldorf. She enjoyed a long and distinguished career in between giving birth to 10 children.

Ruysch argued that his specimens and sculptures helped calm others' fear of death by showing the fleeting quality of life. Still, the strangeness of Ruysch's work is hard to overcome. Who would ever look at something so odd? More people than you might think, in fact. Centuries later, sculptures like Ruysch's are no longer on display, but "plastinated" human bodies assembled by Gunther von Hagens in Body Worlds exhibitions, drew almost 20 million visitors worldwide between 1996 and 2006. Compared to Ruysch's sculptures, the modern exhibition is aimed more at anatomical education and less at moral philosophizing, but the modern cadavers do take artistic poses.