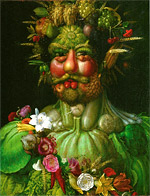 In 1605, after waiting nine months for an audience with the Holy Roman Emperor, an ambassador for the Duke of Brunswick produced a dagger from India, a ruby-studded rhino horn, a crown, a large silver cup holding half an "Indian nut" bigger than a human head, and a handful of bezoar stones (stony concretions from animal guts believed to cure disease). These presents did the trick. The reclusive, melancholy Rudolf II granted the ambassador an audience, and even a visit to his prized Kunstkammer, or curiosity cabinet.

Rudolf clearly had his quirks. When his spirits were at their lowest, he liked to collect his two favorite curiosities: a bowl of precious agate he believed to be the Holy Grail, and a 6-foot horn (probably a narwhal horn, but to Rudolf's credulous mind, it was a unicorn horn), and draw a magic circle around himself with a Spanish sword. This ritual, he hoped, would keep him safe from his enemies. Unfortunately, the ritual was pretty useless, and his enemies were very real. Not long before he died, he was deposed by his Machiavellian brother Matthias in the midst of Bohemia's growing religious and political unrest.

Known for procrastination and indecisiveness, Rudolf was pulled in two directions. He had cultural ties and blood ties to Germans, who were fast becoming Lutherans and Calvinists. But he was the Holy Roman Emperor. He settled in a middle ground, unwilling to strongly favor Catholicism or Protestantism, much to the irritation of the Vatican on one side, and Protestant hard-liners on the other. Instead, moderation and religious tolerance prevailed in his court, as well as an admiration for the humanist Erasmus. Just six years after Rudolf's death in 1612, Europe descended into the religiously motivated madness of the Thirty Years War. Modern historians have argued that Rudolf deserves credit for at least postponing the inevitable.

Part of the Hapsburg lineage that ruled the Holy Roman Empire, Rudolf II was a product of a long line of marriages struck for political alliance — and a touch of inbreeding that might have contributed to the occasional raving lunatic, such as his Spanish cousin Don Carlos and his illegitimate son Don Giulio. Rudolf's own unhappily married parents were Maria, a staunch Catholic from Spain; and Maximilian II, such a lax Bohemian Catholic that he even refused last rites on his deathbed. Rudolf took after his father in religious outlook, if not in disposition. Maximilian had been known for his sunny disposition; Rudolf's persistent melancholy gave rise to rumors of demonic possession. His depression produced a benefit for art and science, however: Nothing calmed his nerves quite so well as a visit to his prized collection, and he added to it with gusto. Like his father and grandfather (Ferdinand I), Rudolf prized flowers. In fact, we was described as Europe's greatest lover of art and flowers. 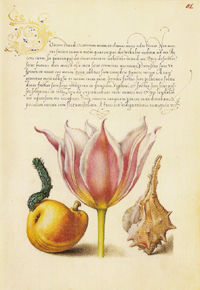 From Nature Illuminated published by The J. Paul Getty Museum

Rudolf's collection was divided into three categories. Naturalia covered natural history, zoology, botany and mineralogy, and his collection of naturalia albums may be the largest still in existence. Scientifica included clocks, watches, celestial globes, and other instruments. Artificialia featured coins, prints, and other examples of fine craftsmanship. Prized items included cameos, Albrecht Dürer's famous hare picture, crystals that Rudolf carried to calm his palpitating heart, corals, bird feathers, fossils and whale teeth. Rudolf also claimed to own a grain of Earth from which God made Adam, two nails from Noah's Ark, a basilisk and some dragons.

Rudolf gathered talented people as enthusiastically as he collected objects. Unfortunately, he also attracted his share of charlatans whose main talents were lying and freeloading. Although his father had lived in Vienna, Rudolf preferred Prague, and the city became a kind of haven for dissidents, heretics, followers of Paracelsus, and heliocentrists. He sponsored artists, such as Giuseppe Arcimboldo, who painted him as Vertumnus, Roman god of the seasons, shown above; and Joris Hoefnagel, who illuminated Mira Calligraphiae Monumenta, shown here. Heavyweight thinkers in Rudolf's court included Tycho Brahe and Johannes Kepler. But the superstitious and credulous Rudolf inevitably fell prey to the occasional con artist, such as John Dee's sidekick Edward Kelley. And when a mysterious manuscript — attributed to Roger Bacon and covered with indecipherable symbols — made its way to Prague, Rudolf spent the equivalent of $100,000 to own it.

More than just a connoisseur, Rudolf tried his own hand at artistic and scientific pursuits. In keeping with the fashion for accomplished men of his time, he attempted to carve ivory sculptures, one complex shape actually residing inside another. He regularly visited his alchemy workshop where he pursued his own experiments in addition to checking on the progress of his protégés.

All the while he surrounded himself with artists, thinkers and magicians, Rudolf paid less attention than he should have to the affairs of state, perhaps because he dreaded dealing with court intrigue. As his political fortunes crumbled, he withdrew from public life even more, and put considerable faith in his horoscope. His enthusiasm for horoscopes and collecting merged in his pet lion, a gift from the Sultan of Turkey. Tycho Brahe once informed Rufolf that he shared a horoscope with his favorite lion cub. When the lion died years later, Rudolf locked himself in his rooms and refused medical attention. He died three days later.