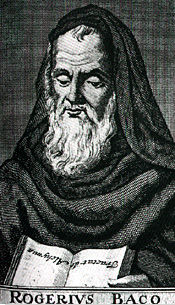 From The First Scientist by Brian Clegg

About a century after Roger Bacon's death, a physician named Peter of Trou claimed Bacon could conjure a bridge out of thin air, or use his magic mirror to see any part of the world. He was even said to make a brazen head that exactly matched human anatomy, and to work with Satan to give it a voice. Thanks to nonsense like this, Bacon eventually acquired the reputation of a charlatan, as well as a dabbler in black magic. Besides contradicting each other, these characterizations could not have been more ironic; during his lifetime, he never hid his disdain for people who claimed to have magical powers.

Born into a wealthy family in rural England around 1220, Bacon began his studies at Oxford when he was just 13. In Bacon's day, Oxford University was not yet a place — medieval universities didn't have locations or buildings, just teachers and students who could move elsewhere if they disliked local conditions. Not only did organizing themselves into groups provide some economic protection similar to guilds, but masters and students enjoyed the added legal protection that accompanied clerical status, even though they weren't clergy. Only a handful of universities existed throughout Europe at the time, and students weren't always welcomed by the locals. Oxford was dangerous, brawls and even murders being fairly common. But at 13, Bacon was expected to fend for himself.

Because he studied in England and not France, Bacon could read the writings of Aristotle. When France eventually allowed its students to do the same, scholars with Bacon's knowledge were in demand, so he traveled to the University of Paris in the 1240s to teach. Around this time, he read Secretum Secretorum, a book covering politics, medicine and natural philosophy. Although attributed to Aristotle, the work's origins were obscure, and it reached medieval Europe through Muslim scholars. The combination of Greek (hence Pagan) and Islamic (believed by respectable Christians to also be Pagan) science concerned many Europeans, but it fascinated Bacon. His fondness for this book was just one instance where his interests aroused suspicion among religious authorities, and the opinions of religious authorities mattered in Bacon's life because he became a Franciscan friar.

Bacon's decision to become a friar may have been more pragmatic than inspired. In an age before movable type, books were rare. He spent what would today be the equivalent of millions of dollars on books, perhaps exhausting his family's finances, or at least his family's patience. The Franciscans might have served as an alternate source of income, but the situation was complicated. Some Franciscans were practical about the need to have their own property, but Bacon aligned with the Spirituals who clung to poverty, and this probably didn't ease his quest for new reading material. Whatever the case, Bacon's active mind caused constant friction with the religious order. Curiosity like Bacon's was not always admired. During much of the Middle Ages, in fact, curiosity was considered a disease, a sort of "lust of the eyes." Bacon's curiosity, plus his complete lack of tact, irritated his superiors. (Historians often marveled at the sheer absence of political skill Bacon exhibited; he believed that people he called stupid should thank him for the input.) The man who had previously spent a fortune on books found himself asking permission from his order just to read what he wanted. Then his luck changed.

Roger Bacon suddenly found himself backed by the most powerful man in Europe: Pope Clement IV. In 1267, more or less on the orders of Clement IV, Bacon produced Opus Majus identifying seven different sciences: perspective (what we would now call optics), astronomy (including geography and astrology), weights, alchemy (a pseudoscientific precursor of modern chemistry), agriculture (what we would now call biology), medicine and experimental science. While waiting for Opus Majus to be copied, he supplemented it with two other works: Opus Minus (an introduction to Opus Majus that ballooned in scope) and Opus Tertium. In a single year, Bacon wrote roughly 1 million words.

Bacon hoped that the publication of his works (or at least the attention of the pope) would make him powerful enough to study and write whatever he liked. But his good luck ran out as quickly as it had appeared; Pope Clement IV died, probably before Opus Majus even reached him. Historical records are sketchy, but not long afterwards, some historians speculate that Bacon was imprisoned for heresy by the head of his religious order. If so, Bacon may have endured solitary confinement for nearly 15 years, and yet — remarkably — he survived to regain his freedom and produce one more work in 1292: Compendium Studii Theologiae.

Some believe that Bacon, always interested in codes, produced another work. Discovered in 1912 by a book dealer named Wilfrid Michael Voynich, a strange cipher named the Voynich manuscript has resisted all attempts at translation, even by the U.S. National Security Agency. Sprinkled with illustrations of odd plants and tiny naked ladies, the manuscript was linked with Bacon by the Elizabethan astrologer John Dee, but carbon dating of the manuscript suggests that it was authored long after Bacon died. 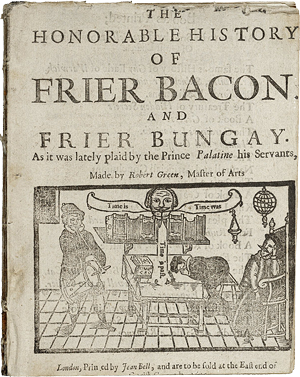 Bacon was very much a product of his time, fervently believing in the coming of the Antichrist, insisting that Christian religion pervade all legal matters, even believing the mythical beasts like the basilisk. His alchemical writings characterized gold as masculine and perfect, and silver as feminine and almost perfect. "Scientific experiments" of the time often involved tempting good or evil spirits, or looking for the elixir of life. One of the points Bacon made to Pope Clement IV was that artists ought to paint images based on geometry. The realistic scenes would make viewers think they were actually witnessing the scene in front of them. That never came to pass, but a century later, Giotto brought a new realism to religious paintings.

Europeans were as mired in superstition and wild speculation in the 16th century as they had been in the 14th. As a result, Peter of Trou's fabled Baconian bronze head rose again, this time in the 1589 play, Friar Bacon and Friar Bungay by Shakespeare's contemporary (and rival), Robert Greene. Greene also portrayed Bacon trying to encircle all of London with a brass wall. A 1655 edition of Greene's play featured a title page with the conscious, brazen head intoning, "Time was . . . Time is . . . Time is past."

In Bacon's own time, medieval monastic scholars, despite their religiosity, were not monolithic. Bacon wrote that some of his contemporaries, influenced by Classical manuscripts, came to question on their own whether God supervised every incident on Earth, no matter how minor, or whether nature might have been designed to handle some things on its own. Bacon meanwhile preceded some of Leonardo da Vinci's ideas by centuries, describing perpetual lamps, flying machines and distorting mirrors that could confuse hostile armies. Even more important, he laid useful foundations for modern science: a strong connection with mathematics, willingness to consider ideas from any source (even from people who weren't Christians), publication and sharing of findings and, above all, experimentation — though his own experiments were probably just thought experiments. Though he has been eclipsed by his Elizabethan namesake Francis Bacon, Roger Bacon was one of Western civilization's most original thinkers.