From Linnaeus by Wilfrid Blunt

John Wray was born in 1627 to an herbalist mother, blacksmith father, and surname he would one day change (he eventually dropped the silent W to ease Latinization). He picked up a love of plants from his mother, and an interest in how things worked from his father, two interests that would serve him well.

Despite a case of Civil War-induced anxiety that caused him to disrupt his studies for a time, he gained admission to Trinity College, Cambridge, and earned a Bachelor of Arts in the late 1640s. At the time, Cambridge used a hierarchical system in managing its students, the poorest having to perform menial tasks for their social betters. Ray was a notch above the menial work, but he did work as a tutor, in addition to taking a succession of posts at Trinity. That career came to an end after the Restoration, when Charles II's Act of Uniformity required an oath of loyalty that Ray wasn't willing to give. He was unemployed but not in dire straits.

One of the students Ray had tutored at Cambridge was Francis Willughby, and the two became lifelong friends. From an affluent family, Willughby invited Ray on a trip to the European Continent just as Ray was giving up his Trinity post. In the company of a couple other young men, the two spent months traveling, sometimes separating to see different regions, but staying in touch. When the trip was over, Willughby offered Ray a place to stay, and Ray lived under the Willughby family roof for years.

Among the sites Ray took in were curiosity cabinets, including the eye-popping collections of Ulisse Aldrovandi. And included in those collections were fossils. When he returned from Europe, Ray composed a travelogue, and devoted 14 pages of it to fossils.

Today, the organic origin of fossils isn't even a matter of debate, but this wasn't always the case. As science historian Martin Rudwick has pointed out, fossils used to be defined as anything dug up or found lying on the ground. While fossils included some clearly organic remains, other so-called fossils were crystals, and in between was a whole range of fossils that were much harder to identify.

Ray went to his grave unable to convince himself one way or the other about the origin of fossils, though he tried to dissuade his friend Martin Lister from believing in the spontaneous generation from rock of fossil sea lilies:

Those Roots, that you have observed, are a good argument, that these Stones were originally pieces of Vegetables. Wonderful it is, that they should be all broken, and not one plant found remaining entire: And no less wonderful, that there should not at this day be found the like vegetables growing upon the Sub-marine rocks.

Ray considered the possibility that some fossils belonged to life forms that no longer existed, but suggesting extinction was tricky business in his time due to theological beliefs. A deeply religious man, he cited the eye — in humans and animals — as evidence of a supremely talented designer. Among his many writings, not surprisingly, was a work on proverbs. Given his religious beliefs, it would make sense for Ray to accept the common notion that the Earth was made specifically for people. Instead, he repudiated the idea:

It is generally received opinion that all this visible world was created for Man [and] that Man is the end of the Creation, as if there were no other end of any creature but some way other to be serviceable to man . . . though this be vulgarly received, yet wise men nowadays think otherwise.

In a few cases, Ray found fossil identification straightforward. When he saw the fossil stems of Equisetum (giant, extinct relatives of horsetails) in Italy, he immediately spotted the resemblance to modern, living horsetails. And when prospecting for fossils, he sometimes found ingenious solutions methods to separate fossils from their surrounding matrix for closer study: He would build a fire on the beach, pile the rocks he found in the flames, then pull them out with a pair of tongs and plunge them into the water. Sometimes the fossils cracked, but usually, they neatly separated from the rock. 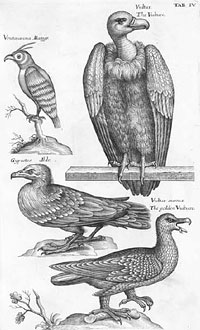 From "Samuel Pepys's Hand-Coloured Copy of John Ray's The Ornithology of Francis Willughby (1678)" by Robert Montgomerie and T.R. Birkhead in Journal of Ornithology

Fossils weren't all that interested Ray. Collaborating with Willughby while he lived, and soldiering on after Willughby died, Ray published The Ornithology of Francis Willughby released in Latin in 1676, and in English in 1678. Describing more than 300 bird species, the book remained a milestone in ornithology centuries later. Ray also saw a book on fish species through publication. Published only in Latin, the fish book wasn't nearly as popular as the bird book, and it nearly bankrupted the Royal Society.

Ray also contributed substantially to the field of taxonomy. Before Linnaeus developed his system of binomial nomenclature, Ray realized that naturalists needed a naming system that transcended language — by using common names in local tongues, savants of different nationalities were organizing their catalogues of plants and animals in completely different ways. Long before Linnaeus, Ray proposed naming species in Latin. He also developed a general scheme for plant classification, but unlike the Linnaean system, which concentrated on reproductive organs, Ray's was based on overall form and structure. He classified plants as having either narrow or wide leaves. These categories were later supplanted by Antoine Laurent de Jussieu, who classified plants as either monocots or dicots. Botanists still use this classification system today.

Ray may be admired as much for the theories he rejected as the theories he proposed. His writings on natural history gave no space to Centaurs. (Unfortunately, other "implausible" creatures like armadillos and wolverines didn't merit mention, either.) One supposition of his time was that fossils were the seeds of organisms that simply never sprang to life, but this just didn't strike Ray as logical. Why would mere seeds look so much like the real thing? Likewise, he rejected the notion that fossils embedded in mountains had been placed there by the biblical flood. He recognized that floodwaters covering the entire planet would require the sudden appearance and subsequent disappearance of a tremendous amount of water, and this didn't fit with what he understood of natural law. He also repudiated spontaneous generation, but his reasons were more complicated than a simple lack of evidence or logic:

For if this Point be but cleared, and it be demonstrated that all Creatures are generated univocally by Parents of their own Kind, and that there is no such Thing as Spontaneous Generation in the World, one main Prop and Support of Atheism is taken away . . .

While Willughby lived, it was a big, presumably happy family that included Ray. Ray married the governess of Willughby's children. She was 20; he was 44. But after Willughby died, his mother — who'd always had a soft spot for Ray — also died, and Ray saw fit to move. Ray and Willughby's widow were not on friendly terms, and the situation worsened after she remarried.

The last book about Ray and Willughby's research was on insects. It came out after Ray's own death, and he appeared as the sole author. Science historian Tim Birkhead pins that attribution not on Ray but on the Royal Society, in which Ray was a Fellow. Yet Birkhead also describes "something a bit unsettling about the way in which Ray presents Willughby to the world," noting how often he referred to himself alone in the bird book.

Whatever the case with attribution, Ray was a loyal friend while Willughby lived, and Ray lived long enough to witness his own fame. But in his final years, his health was so poor — with constant, painful ulcers on his legs — that fame must have been little consolation. He died in 1705.