Newly employed by the American Museum of Natural History, Roy Chapman Andrews regularly loitered near a meteorite display just to cast a furtive glance at Henry Fairfield Osborn as he passed on his way to lunch. Andrews didn't suspect that, years later, the intimidating man would become his staunchest supporter in a series of expensive expeditions.

Like Andrews, paleontologist Edwin Colbert worked for many years at AMNH, and remembered Osborn with mixed emotions.

Professor Osborn was quite aware of his eminence. I had seen him at a distance in the halls and corridors of the museum — a large and forceful-looking person, generally clad in rather formal clothes, of which a vest with white piping along its edges was a noticeable feature. He would often be seen striding along with two or three people in his wake, like a majestic ocean liner accompanied by several gulls. . . . From this it will appear that Osborn was a bit imperious, and he was. But one had to take him in context. He had grown up in the lush days of the Robber Barons, and he viewed society as a highly stratified arrangement, in which he occupied a top stratum. 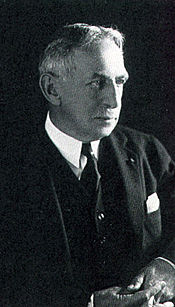 From Bones of Contention by Roger Lewin © AMNH

Osborn came from a family of distinction. His father was the shipping magnate William Henry Osborn, who founded the Illinois Central Railroad. Osborn's Uncle Pierpont was the famous banker J.P. Morgan. Early on, the wealthy, articulate Henry Fairfield Osborn was appointed vertebrate paleontologist for the U.S. Geological Survey. In 1891, he joined AMNH, when the museum jointly hired him with Columbia University. Besides Andrews, Osborn assembled a stellar collection of fossil hunters and preparators, including Charles Sternberg and Barnum Brown. In 1908, Osborn succeeded Morris K. Jesup (the man who hired him) as president of AMNH, becoming the first scientist to hold the post. He remained until 1933, making his employer one of the foremost natural history museums in the world. Osborn knew the value of publicity, and the museum's publicity department expanded dramatically under his direction. He was a prolific author as well as a member of prestigious scientific societies, and he had an ego to match. His approach to museum management was steeply hierarchical — him and the top, and his subordinates, even those whose abilities outshone his, handling the tedious tasks. He was so convinced of his superiority that when the paleontologist George Gaylord Simpson once tried to blot Osborn's excessively inky signature, Osborn chided Simpson, "Never blot the signature of a great man."

And yet Osborn had a soft side. After decades of marriage, he still exchanged weekly, if not daily, love letters with his wife. Her death was a blow from which he never quite recovered.

Like his predecessors, Osborn compared fossil remains with those of living animals, but he also innovated, encouraging his staff to make small-scale models of dinosaur skeletons to understand the range of possible motion and the necessary musculature. He hired Charles R. Knight to make murals and sculptures of ancient life. Osborn felt his highest calling was to educate "a very large class of inquisitive but wholly uninformed people." It was Osborn who authorized a series of AMNH expeditions to Mongolia during the roaring 20s. Roy Chapman Andrews led the trips, which turned up astonishing dinosaur fossils — but not the treasures Osborn most wanted: fossils of human ancestors.

While Andrews dug for fossils abroad, Osborn was just as busy at home. When John Thomas Scopes was tried for teaching evolution in Dayton, Tennessee in 1925, Osborn played a substantial but complicated role in the defense. Scopes's supporters frequently turned to Osborn for information, and Osborn worked furiously to demonstrate that evolution and religion could peacefully cohabitate. But rather than making the "non-overlapping magesteria" argument that Stephen Jay Gould would make decades later, Osborn infused his interpretation of evolution with religious conviction. Evolution proved God's divine plan, he argued, drawing the ire of creationists and scientists alike. As for the trial, Osborn argued that the public wouldn't care so much whether Scopes had violated Tennessee law (he probably had) but whether Scopes was teaching the truth. A social conservative, however, Osborn disdained the American Civil Liberties Union, which was bankrolling the trial. And despite repeated requests, Osborn didn't show up for the trial itself.

Contemporary rendition of Nebraska Man, from God — or Gorilla by Constance Areson Clark

In the years leading up to the Scopes Monkey Trial, Osborn readily debated William Jennings Bryan (the prosecutor) but a significant piece of evidence Osborn pointed to was a tooth from an alleged primate found in Bryan's home state of Nebraska, a tooth that really belonged to a peccary. By the time the trial date approached, that tooth was turning into an embarrassment that Osborn likely didn't want to confront. He might also have foreseen what a media circus the trial would become.

Outside of the Scopes Monkey Trial, the legacy that Osborn left to the study of human origins was not altogether shiny. Although an evolutionist, he held a very different view of evolution than Darwin. Osborn believed that a very human-like ancestor had preceded modern humans by some 30 million years. He repeatedly railed against the popular image of a prehistoric "ape man" and wanted it replaced with his vision of a dignified Dawn Man.

The most welcome gift from anthropology to humanity will be the banishment of the myth and bogie of ape-man ancestry and the substitution of a long line of ancestors of our own at the dividing point which separates the terrestrial from the arboreal lines of primates.

So intent was Osborn on pushing back the pedigree of humans (white ones, at least) that one of his former students, William King Gregory, accused him of "pithecophobia": fear of apes and monkeys. Gregory did not, however, criticize Osborn's views on race. Few people did. Teddy Roosevelt described The Passing of the Great Race, for which Osborn wrote the preface, as a "capital book — in purpose, in vision, in grasp of the facts our people must need to realize."

Osborn believed — firmly — that our elusive human ancestors arose in Asia. To his credit, he made a well-reasoned rejection of arguments that modern humans arose in Western Europe, pointing out that Europe had been exhaustively searched for human remains and artifacts for a century, whereas Asia had not. But he wouldn't consider the possibility that our ancestors arose in Africa. He disregarded Darwin's assertion that humans arose there, and he completely ignored Raymond Dart's discovery of the Taung Child, Australopithecus africanus. Osborn's writings on race make his reasons clear. 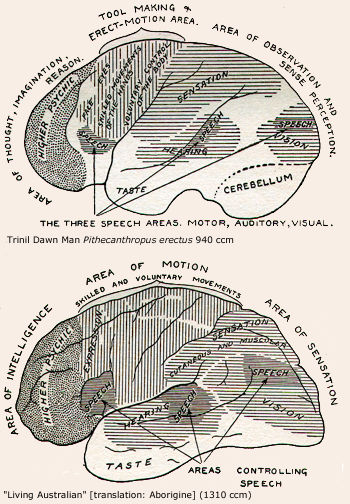 From Man Rises to Parnassus by Henry Fairfield Osborn

Osborn had the tremendously bad luck to write his manifesto, Man Rises to Parnassus, after Piltdown Man was found but before the find was debunked. He described the discovery of the faked fossil as "almost a miracle," recanting his own initial doubts about Piltdown. He went on to compare the size of the braincase of Piltdown Man with that of a modern Aboriginal Australian. Osborn found Aborigines so primitive that he saw fit to compare their brains to those of Java Man (now named Homo erectus), and he indicated regions of those brains with an almost amusing confidence. A few years later, in Nature, he ranked Papuans behind Piltdown.

Osborn took a similarly dim view of sub-Saharan Africans, presiding over the executive committee of the Bronx Zoo when, in 1906, it exhibited Ota Benga, "a genuine African pygmy," in its Monkey House. Osborn eventually ordered the sign promoting the Benga attraction removed, fearing a lawsuit from an associate of Booker T. Washington. But even without the sign, Benga remained on display.

Racism certainly didn't originate with Osborn (or with evolutionary theory), but he tried to give scientific-sounding reasons for deep racial divides.

We now subdivide Homo sapiens into three or more absolutely distinct stocks, which in zoology would be given the rank of species, if not of genera; these stocks are popularly known as the Caucasian, the Mongolian, and the Negroid. . . . The spiritual, intellectual, moral, and physical characters which separate these three great human stocks are very profound and ancient. . . . man goes forth to seek and labor for food. He may go to the temperate regions, to the North Pole, or to the Equator. If he chooses the Equator the quest for food is very easy and requires relatively little intelligence; the environment is not conducive to rapid or varied organic selection; the struggle for mere existence is not very keen; the social and tribal evolution is very slow; intellectual and spiritual development is at a standstill. Here we have the environmental conditions which have kept many branches of the Negroid race in a state of arrested brain development.

Osborn was confident that he could discern the race of long-dead artists, simply by examining the artistic merits of their work.

All this art . . . appears to be the product of a single racial mind and racial spirit. . . . in the orderly development of a single art — an art marked by the combined love of beauty and truth — we have the most positive proofs of the craftsmanship of a single race. That race was probably of the pure or mixed Cro-Magnon type.

People of color should not feel singled out for scrutiny, however. Osborn (like plenty of people at that time) not only found white better than black, but also Western civilization better than Eastern, and Nordic stock better than Mediterranean. In fact, he categorized Europeans with impressive taxonomic specificity.

The most ancient ethnic element in the population of Brittany is the broad-headed, gray-eyed Alpines or Celts, short of stature, very Irish in appearance, but without the excitable Irish temperament.

Osborn lamented what he saw as a decline in the human race . . .

The rise of primitive and of uncivilized man is subject to the same laws as those which prevail throughout the animal kingdom, until human civilization steps in and interferes with the natural orders of things. Thus when man begins to specialize and human races begin to intermingle, Nature loses control. It appears that the finest races of man, like the finest races of lower animals, arose when Nature had full control, and that civilized man is upsetting the divine order of human origin and progress. . . . In America the original pioneer stock is dying out; the foreign element is in the ascendency. . . . Purity of race is today found in but one nation — the Scandinavian; but Scandinavia has been seriously bled by emigration.

Care for the race, even if the individual must suffer — this must be the keynote of our future. This was the guiding principle which underlay all the discussions of the Second International Congress of Eugenics in 1921.

It was more than a matter of discussion at meetings. Osborn wrote:

The study of racial origins becomes a matter not only of concern to the intellectual life of the world but will be a matter of vital importance in all departments of human endeavor. It will even become a matter of political importance, a matter to be taken into consideration by the State.

To anyone familiar with early-20th-century American history, Osborn's hint about "the State" raises hairs on the back of the neck. Jim Crow segregation laws were already in effect in the American South. Thanks to the eugenics movement, those laws were supplemented with immigration quotas, asylum admissions, incarcerations and forced sterilizations. He insisted that evolutionary progress could only occur if the "best in kind" reproduced, which is arguably true, depending on how you define "best" and "progress." Criticizing "one-sided reports in the American press," Osborn visited Germany after the Nazis came to power in 1933 and pronounced himself "greatly impressed by the solidary of the country and enthusiasm for the rebirth of Germany under the new conditions of the Hindenburg-Hitler regime."

In the 21st century, a better understanding of the human genome has shown that greater divisions exist within races than between them, a finding that would probably have amazed — if not enraged — Henry Fairfield Osborn.