When Olaus Magnus (Olaf Mansson before his name was Latinized) was born in 1490, his homeland of Sweden was Catholic. Olaus and his older brother Johannes both became priests, but Martin Luther penned his Ninety-Five Theses when Olaus was in his mid-20s, and the religious landscape of northern Europe began to change. The brothers lived for awhile in Poland then eventually sought refuge in Catholic-friendly southern Europe. After his brother's death, Olaus inherited the position of Archbishop of Uppsala. It wasn't much more than a formality; there were hardly any Catholics left in Uppsala to oversee. Olaus himself likely died in Rome in 1557.

Perhaps the only surviving portrait of Olaus Magnus. From Sea Monsters by Joseph Nigg.

Despite his countrymen's overwhelming conversion to Protestantism, Olaus must have pined for his homeland because he spent many years laboring over two publications about it: a wood-block map titled Carta Marina printed Venice in 1539, and a book titled Historia de Gentibus Septentrionalibus ("History of the Northern Peoples") published in Rome in 1555. What might be the only surviving portrait of Olaus occurs in his History, where he appears as a strapping mountaineer clad in primitive snowshoes, just like his horse.

Olaus devoted whole chapters of History to explaining figures in Carta Marina. Printed on nine separate sheets, it measured roughly 4 feet high by 5 feet wide. At the time it was printed, it was, in the words of mythological-animal expert Joseph Nigg, "the largest, most accurate, and most detailed map of Scandinavia — or of any European region — at that time." The map covered land areas of Scandinavia, dotted with landmarks and vignettes of human inhabitants. The land areas of the map also featured largely realistic pictures of recognizable animals. But the watery areas depicted on the map were different. The sea in Olaus's map teemed with fantastic monsters.

Renaissance maps rich in sea monsters were not necessarily the maps consulted by ship captains. Historian Chet Van Duzer explains that the monsters decorating many maps really were decorations, and the people purchasing those maps had to pay extra for the exotic little creatures. So sea monsters were perhaps more likely to appear on maps hanging on the walls of libraries owned by people who didn't have to rough it across the ocean. But Nigg explains that, in the case of Carta Marina, Olaus apparently did mean to show animals he believed were real, because he marked the creatures with letters on his map, and provided detailed descriptions in a key in the lower left corner. He also believed that at least some of the creatures served as omens of societal upheaval. In his uneasy times, one could find an abundance of bad omens. 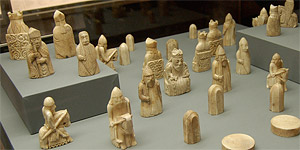 Carved from walrus ivory around the 12th century, these Lewis chess pieces now reside at the British Museum. Photographed by Chris Devers (some rights reserved). 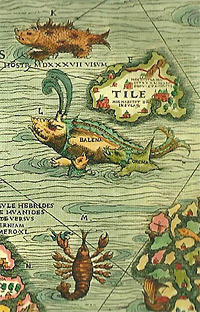 A portion of Carta Marina. From Sea Monsters by Joseph Nigg.

Sea monsters became Olaus's lasting legacy. Images borrowed from his Carta Marina recurred in later maps by Abraham Ortelius and Sebastian Münster, and proliferated in the encyclopedic works of Conrad Gesner and Edward Topsell. Although many of Olaus's descriptions beggared belief — the kraken supposedly had horns as big as uprooted trees eyes as wide as 10 cubits, and the sea unicorn could destroy ships — some were likely based on actual animals, even if his pictures and written descriptions of them were exaggerated. Nigg explains several possible relationships between the monsters of Carta Marina and actual animals: the sea unicorn based on the narwhal (showing an early understanding of the origin of so-called unicorn horns); the prister based on the sperm whale, the polypus based on the lobster (although the written description of its behavior sounds more like a smart little octopus), the island-sized whale based on the blue whale, and the ziphius based on the orca. The sea swine, sea cow and rosmarus were likely based on the walrus, and Olaus accurately recorded that the animal's tusks could be carved into weapon handles and chess pieces.

As for the kraken, fantastic descriptions persisted two centuries after Olaus's map was published. Erich Pontoppidan, Bishop of Bergen, dismissed "credulous Ol Magnus" and his accounts of island-sized whales, but nevertheless described the kraken as 1.5 miles in circumference. Today, historical descriptions of the kraken are generally understood to relate to the giant squid, though its eyes are a mere 15 inches in diameter. Pontoppidan also popularized Olaus's gigantic sea serpent. In Olaus's day, the serpent was believed to be real only in Scandinavia; after Pontoppidan's time, sea serpent sightings became a worldwide phenomenon.

Other animals in Carta Marina are harder to correlate to real organisms, such as the sea rhinoceros. It was probably based on the terrestrial animal. The belief persisted in Olaus's day that every land animal had its counterpart in the ocean. Medieval superstition and monster lore still thrived in the 16th century, and in some ways got even worse. Religious tensions from the Reformation probably increased European anxieties about monsters, with Protestants and Catholics blaming sea bishops and sea swine on each other's erring ways. At the same time, though, naturalists were trying to give accurate descriptions of real animals, while scrambling to catalogue discoveries from the New World. Olaus Magnus compiled his map and book as European natural history was taking its baby steps.