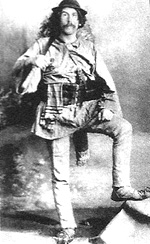 From Darwin's Universe: Evolution from A to Z by Richard Milner

Born to an aristocratic family in Transylvania in 1877, Baron Franz Nopcsa was privileged, eccentric, and widely regarded as arrogant. Until fairly late in his life, his inherited wealth excused him from having to work for a living, though he did take up employment as a spy for the fading Austro-Hungarian Empire. He is remembered now for his infatuation with Albania, and his bid to become that country's king. When Albania passed him over for a minor Austrian prince, Nopcsa wasn't simply disappointed, he was flatly flabbergasted.

Nopcsa's quirks might overwhelm the story of his life, but he was more than a nobleman with an ego and a lot of leisure time. He was also exceptionally bright, and Albania wasn't his only passion. So was the history of life. From the vantage point of the 21st century, paleontologists and geologists have noticed that many of his hypothesis were not only accurate, but also prescient.

In 1895, when he was about 18 years old, his sister discovered some big bones on one of the family estates in Transylvania. Nopcsa was fascinated, and took the bones to a geology professor in Vienna. The professor offered the young man a department technician to help with the recovery and description of the bones, but Nopcsa decided to work on his own, and taught himself anatomy. In 1897, he published a formal description. The fossils belonged to an ornithopod dinosaur later dubbed Telmatosaurus. In 1899, he delivered his first lecture, on a hadrosaurid dinosaur, at the Austrian Academy of Sciences. In 1903, he completed his doctoral thesis.

Nopcsa could keep up with paleontology papers in five different languages, and he published in multiple languages as well, on geology as well as paleontology. Besides writing dozens of papers and a 700-page tome on the geology in and around Albania, he was an early adopter of continental drift theory. A figure in a paper he published in 1927 illustrated magma sources and subduction zones broadly consistent with modern tectonic theory.

To better understand the origin of birds, Nopcsa studied dinosaur tracks, paying particular attention to how the hallux (big toe) might have evolved into the reflexed position. He recognized that different flying vertebrates couldn't all adopt flight in the same way. Birds, for instance, achieve lift with feathered arms but bats and pterosaurs have relied on membranes between their fingers. He also argued that whether an animal was bipedal or quadrupedal on the ground would likely dictate how it flew, and that going airborne while transitioning from four legs to two might be too much of a leap. In Taking Wing, Pat Shipman writes:

Is this contention supported by the fossil record? Yes. There are few evolutionary transitions from quadruped to biped, suggesting that this is a difficult evolutionary change to make, and in every bipedal form for which there is a good record, the animal has remained terrestrial as it evolved bipedality. The four-legs-to-two-legs transition has never, as far as we know, involved a dramatic shift in substrate as well. So, Nopcsa would argue, any creature that flies with two limbs must be descended from ancestors that had already become bipedal on the ground.

While some other scientists were compartmentalizing different aspects of geology and paleontology, Nopcsa engaged in multidisciplinary research. There may be no better example of this than his hypothesis about diminutive dwarfed dinosaurs of Hatzeg.

When he first encountered remains of small-bodied sauropods belonging to the genus Magyarosaurus found on family land, Nopcsa figured they were juveniles. But after examining their bone textured under a microscope, he concluded that the dinosaurs were unusually small adults. He further proposed that these the dinosaurs had downsized in response to limited resources. Magyarosaurus lived during the Cretaceous, when the Tethys Sea inundated much of southern Europe. The land comprising the Nopcsa estates sat on what may have been an island: Hatzeg, or Hateg (some debate continues about whether it really was an island). In a 1914 paper, Nopcsa proposed that, like many large animals eking out livings on islands, the dinosaurs evolved small bodies, constrained by limited resources. The hypothesis was largely ignored until the late 20th century. In the 21st century, new studies have bolstered his island dwarfing hypothesis, not just that high water isolated parts of southern Europe, but also that his little dinosaurs were indeed full grown.

Science wasn't the only area where Nopcsa was ahead of his time. In his salad days, he had a fling with a Transylvanian count. Years later, perhaps because of his wealth, Nopcsa felt no need to hide the fact that his devoted secretary, a much younger Albanian man named Bajazid Elmaz Doda, was more than his secretary. In his bid to become king of Albania, thought, Nopcsa suggested that he could bring the country some needed cash by marrying an American millionairess.

Nopcsa found the final years of his life difficult. When he was a young man, peasants bowed low when he passed, but the early 20th century brought social and political changes, and lowly types no longer bowed. Some might have even chased him with pitchforks. In turn, Nopcsa occasionally chased them off with a small pistol, a stereotypically cranky old man telling kids to get off his lawn. Even worse, as Transylvania transferred to Romania after World War I, he lost the family estates and income. He accepted a position as the head of the Hungarian Geological Institute, but the constraints of working life didn't suit him, and he left after a few years. By 1928, Nopcsa's health was so frail that he addressed the audience at a paleontological symposium from a wheelchair. In 1933, plagued by poverty and depression, he committed suicide. Before turning the gun on himself, he drugged Doda and shot the younger man in his sleep. Nopcsa explained in a note that he didn't want to leave Doda behind in misery and poverty.