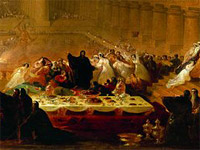 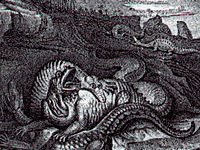 Top: Belshazzar's Feast detail from "John Martin and the Theatre of Subversion" by Max Adams
Bottom: Country of Iguanodon detail from Gideon Mantell and the Discovery of Dinosaurs by Dennis R. Dean

John Martin could truly be called the child of revolution. He was born in July 1789, the same week French revolutionaries stormed the Bastille, though Martin came into this world on the other side of the English Channel. The son of a humble farm laborer, he was one of just five children to survive to adulthood out of 13 babies. At 14, Martin began an apprenticeship to a coach builder to learn how to paint heralds of arms. At 15, he started studying under an Italian painter, and started painting china. At 23, Martin struck out on his own to paint mythological and biblical scenes. Not long after turning 30, Martin was a superstar. Crowds coming to see his painting Belshazzar's Feast had to be kept behind a railing to protect the painting. Other hit paintings included The Fall of Nineveh, Sadak in Search of the Waters of Oblivion and Seventh Plague of Egypt. In Deluge, a painting about the biblical flood, Martin captured the anguish of the damned left behind to drown.

Despite his popular appeal, Martin never enjoyed acceptance from England's artistic community. About Martin, art critic John Ruskin once derided "Workmen such as John Martin, whom I do not consider to be painters at all." Nor did he gain admittance to the Royal Academy, which he wanted all his life. Unlike adoring crowds, who sensed "a spirit . . . not of the world," many contemporaries disdained his dramatic style. Others claimed he captured on canvas the experience of intoxication brought on by opium. His characteristic apocalyptic style was termed "Martinesque." Partly due to being confused with a mentally ill brother (Jonathan) who set fire to York Minster and spent the rest of his life confined to Bedlam, the painter was even nicknamed "Mad Martin."

The younger, more stable John nevertheless suffered a prolonged depression in the 1830s, induced partly by faltering finances. The death of his brother Jonathan and death by suicide of his nephew threatened to plunge the painter into even deeper despair but instead he somehow shook off the melancholy and returned to painting and planning civic improvements.

Martin's paintings might look like the work of a passionately religious person but according to biographer Max Adams, Martin was a skeptic who often employed painting to obliquely criticize the hubris of contemporary public figures. Belshazzar's Feast, for example, was a "a thinly disguised libel on the self-same Prince Regent made more potent by his coronation as George IV and the grotesque accompanying feast." In 1821, the newly crowned king spent 243,000 pounds on the celebratory meal. (Hiding behind painting was a shrewd idea considering some of Martin's more outspoken friends ended up behind bars.) Martin had an impressive ability to depict worlds undergoing irreversible change, Adams argues, and even more importantly, the artist hoped to be an agent of change. The man mistaken as "Mad Martin" designed a new sewage system for London and even envisioned something like the London Underground. Some of his water-sanitation schemes were put into practice after he died, and after yet another cholera outbreak devastated the city.

As for Martin's paintings, part of his popular appeal stemmed from developments in — and his mastery of — mezzotint engravings. Those who couldn't easily see his original paintings in London had access to affordable prints. The engravings provided a good source of income until his works were pirated. Solid copyright laws were not yet in place to protect artists like Martin. Toward the end of his life, failing eyesight prevented him from continuing his engraving work.

Nineteenth-century paleontologists weren't stupid. They knew how to capitalize on fame, even someone else's. The result was that John Martin, who became a celebrity for his illustrations of biblical scenes, forged into deep time in the 1830s. He illustrated the frontispieces for a variety of popular publications, by Gideon Mantell (as shown on this page), George Richardson and Thomas Hawkins. Martin brought the same apocalyptic mood to dinosaur pictures as he did to everything else. The results were dragon-like dinosaurs with bulging eyes and contorted necks, doing perpetual battle with each other. They were also gnawing on each other, an ironic move for herbivores, but more entertaining than eating plants. Martin's style was especially well suited to the melodramatic prose of the eccentric fossil collector Thomas Hawkins; whether showing people or dinosaurs, pretty much every scene Martin painted happened at night.

The same characteristics of Martin's work that made him a sought-after illustrator for books written for the public made other scientists wary of him. When writing academic papers for each other, many scientists chose more restrained, accurate illustrators who would produce more realistic depictions. But crowds still got goose bumps from pictures by Martin.