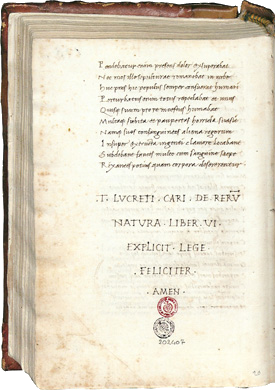 From The Swerve by Stephen Greenblatt

Everything is transformed by nature and forced into new paths. One thing dwindles . . . another waxes strong. In those days, many species must have died out altogether and failed to multiply. Every species that you now see drawing the breath of life has been preserved from the beginning of the world by cunning, prowess, or speed.

Nearly 2,000 years before Charles Darwin would write Origin of Species, a Roman poet suggested that the organisms best suited to their environment prevail, and also described extinction. That poet was Titus Lucretius Carus, and his poem was De Rerum Natura (On the Nature of Things or On the Nature of the Universe).

Little is known about Lucretius. The philosopher-poet likely lived from about 95 to 50 BC, but historians don't know whether he was an aristocrat or a slave; the Lucretii were a distinguished family, but freed slaves often took the names of their former owners, and Lucretius could have been either. His poetry established that he was a follower of the Greek philosopher Epicurus, who had lived a few centuries earlier. Epicureanism discouraged superstition and any belief in divine intervention. For his part, Lucretius maintained that there were gods, but those gods had no real influence in human affairs and certainly had not created the world for us. The Epicurean philosophy aimed for a state of tranquility and freedom from fear, particularly the fear of death.

The Epicurean pursuit of pleasure found few admirers among Europe's medieval Christians. Living in the fourth and fifth centuries AD, Saint Jerome wrote that Lucretius took his own life after going mad from a love potion. What evidence Jerome had for his claims is unclear, but Lucretius emerged with the reputation of a deranged loser driven by excess. In fact, Lucretius's writings stressed not just pleasure but also moderation; the man might have enjoyed his wine, but he evidently had sufficient sense to avoid hangovers. Modern scholars generally agree on one detail in the medieval story about Lucretius: He likely died before completing his epic poem, leaving it to be edited after his death by Cicero.

In the centuries after Lucretius died, scholars weren't just intrigued by his ideas. They were drawn in by his eloquence. Lucretius was part of generation of Latin writers striving to give their language the necessary nuance to deal with Greek ideas, at a time when Greek was the language of learning. Considering Latin became the language of learning for the next 1,600 years, these writers must have been successful.

Though Lucretius was no hero to ascetic Christians, his work didn't disappear. Isidore of Seville cited it as an authority on meteorology in his 7th-century encyclopedia. And throughout the Middle Ages, Catholic monks preserved De Rerum Natura. Monastic discipline entailed reading, and monks needed books. Before the availability of the printing press, the books had to be painstakingly copied by hand. Despite its unnerving implications (Lucretius didn't believe in the immortality of the soul, and he was no fan of religion), a copy of his book survived in a medieval monastery long enough to be fished out by an Italian humanist, Poggio Bracciolini, in 1417.

Far more is known about Bracciolini than the poet he helped rescue from obscurity. Born in Tuscany, he studied Classical literature in Florence before moving on to Rome — home to the Vatican but also a kind of ghost town in the early 15th century. Gifted with exquisite handwriting, Bracciolini helped develop the script that became the basis for italic and roman typefaces.

Just two years before he found De Rerum Natura, Bracciolini was apostolic secretary to Pope John XXIII. Unfortunately for the pope and his secretary, the pontiff was deposed (the name John XXIII was taken again in the 20th century). Without a job and without much money to live on, Bracciolini made the gutsy choice to go book hunting in Germany. Historians don't know for sure which monastery provided the Lucretius book, but speculation favors the Benedictine Abbey of Fulda.

The monastery apparently had a copy made for Bracciolini (monks were understandably reluctant to part with their books) and that copy is now lost. Another copy, made by one of Bracciolini's humanist friends (shown on this page), survives, and Bracciolini's find apparently spurred dozens of copies, more than 50 of which survive today. The survival of that many manuscripts from the 15th century can be taken as evidence of its popularity at the time. Desmond King-Hele, foremost biographer of Erasmus Darwin, credits Lucretius with influencing the Enlightenment evolutionist, and describes De Rerum Natura as "the most important evolutionary statement of ancient times." Thomas Jefferson owned five Latin editions of De Rerum Natura, as well as translations into English, French, and Italian. And fragments of Lucretius's poem, from an era much closer to his own lifespan, later turned up in an archaeological dig. In the late 1980s, a papyrologist announced the discovery of snippets of the poem on charred papyrus from Herculaneum, a city scorched by the eruption of Vesuvius.

De Rerum Natura consisted of three pairs of books. The first pair dealt with atoms, the second with the soul, and the third with the cosmos and mortality. The philosopher-poet subscribed to some of the misconceptions of his day — spontaneous generation, geocentricity — but presented notions completely in line with modern scientific thought. He argued that living things and inanimate objects are composed of incredibly small particles (atoms), an idea first proposed centuries earlier but not generally accepted in Lucretius's day, or for centuries afterwards. He argued that, although the particles are constantly moving and configuring themselves into new forms, the particles themselves are eternal.

Lucretius explained earthquakes as rock masses falling through giant underground caverns — not a completely valid explanation, but he was arguably onto something in connecting the natural hazards to what happens under the planet's surface.

Lucretius also advanced the idea of evolution. He argued that nature experiments endlessly, and the organisms that adapt best to their environment have the best chance of surviving — until conditions change, anyway. A believer in spontaneous generation, Lucretius nevertheless felt that the "worn-out Earth" that had once spontaneously made large beasts was now reduced to making just tiny, lowly animals. Like other Epicureans, he challenged the assumption that humans are necessarily superior to animals, noting that mothers in the wild recognize and nurture their babies as do human moms.

Although an Epicurean who saw no inherent evil in the pursuit of pleasure, Lucretius didn't believe that humans originated in some mythological paradise. Instead, he figured that the lives of early humans were particularly tough, especially since they lacked fire and agriculture. Civilization brought advances, but at a cost, and Lucretius remarked that the shipwrecks, wars and even overeating of his own day brought about higher mortality rates than the earliest humans had suffered.

When Lucretius lived, many of his contemporaries believed myths of monsters and gods who destroyed them, often in acts of vengeance. Lucretius scoffed. He scorned the notion that lightning bolts were hurled by angry gods at erring humans. Why, Lucretius wondered, didn't powerful gods have better aim? Some bolts allegedly thrown by Zeus, the poet pointed out, hit the god's own temple.