Dinosaur depictions were several decades old by the time Knight was born, but he added a crucial innovation: scenery. This involved making multiple assumptions, some of them wrong, such as grassy landscapes (grass didn't evolve until after dinosaurs had left the stage). Still, his murals and dioramas gave museum visitors and readers an impression of the world dinosaurs inhabited.

From the 1890s through the 1950s, Knight shaped the public's perception of dinosaurs — and many other prehistoric life forms — probably more than anyone else. Yet he wasn't really a scientist. Knight was an illustrator, a native New Yorker trained as a commercial artist, who was passionate about nature. As a child, he was reputed to have once said to his father, "I'm tired of hearing about Jesus. Tell me about elephants." His father worked for a banking house owned by the Morgans of J.P. fame, and the famous banker later sponsored some of Knight's murals.

Oddly, his first steady job was with a church-decorating firm, but in his free time, Knight visited the Central Park Zoo where he regularly sketched the lively occupants. Slower and smellier animals awaited in the taxidermy department at the American Museum of Natural History. When the scientists asked him to sketch a long-extinct mammal based on its fossilized skeleton, the produced such a fine sketch that they started sending a steady stream of work his way. His talent eventually attracted the attention of Henry Fairfield Osborn, who oversaw the whole museum. Unfortunately for everyone involved, Knight often clashed with his museum bosses when they critiqued his work. The imposing Osborn was no exception.

Besides the American Museum of Natural History, Knight's work has also been displayed at the Natural History Museum of Los Angeles County, the Carnegie Museum and the National Museum of Natural History at the Smithsonian. At one point, he undertook a lucrative project painting prehistoric murals for the Field Museum in Chicago. The money didn't last long, though. For investment, he entrusted the funds to a businessman friend who — panicked about FDR's New Deal — sold Knight's investments off at a fraction of their worth.

Knight collaborated with Osborn's mentor, E.D. Cope, as well as the paleontologist William Diller Matthew. Based on Matthew's lifelike articulations of fossil skeletons, Knight produced little clay models that he then cast in plaster. That step completed, he could move the casts around and examine the resulting lights and shadows. Then he painted the same animals, based partly on his cast and partly on his knowledge of living organisms. 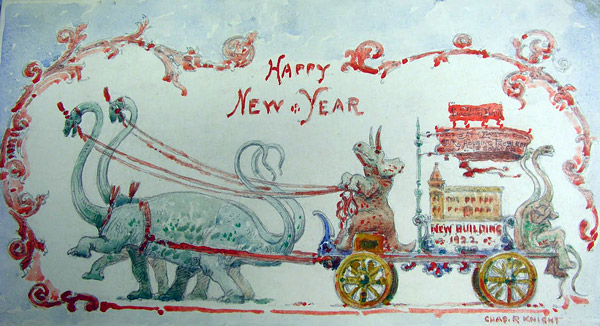 Throughout his long artistic career, Knight struggled with poor vision. A childhood injury damaged his vision in his right eye, and myopia and astigmatism affected his left eye. Cataracts piled on more vision problems. He was legally blind for a long stretch of his life, and he lost his vision completely a couple years before he died. In later years, he would climb scaffolding to put finishing touches on his murals. Back down on the floor, he couldn't see the work he'd just done. But for as long as he could, he kept working.

In 1946, Knight both wrote and illustrated Life Through the Ages, years before other scientific illustrators started authoring their own books. The pictures were beautiful, though some of the narrative was a little quaint. "Stegosaurus was, no doubt, the stupidest member of a very moronic family," he wrote. Of T. rex, Knight remarked, "He was just an enormous eating machine with an insatiable appetite and with practically no brains." And Knight's assessment of dinosaurs in general was, "They had been in existence too long, for they were stupid, unadaptable, and unprogressive." Needless to say, some of Knight's ideas about droopy-tailed dinosaurs have since been overturned. Likewise, his other illustrations had occasional errors, such as misidentified animals in his pictures of the Cambrian. Yet these errors just reflected scientific thinking of the day.

From Dinosaurs Past and Present: Volume I by Bakker, Callison, Hallett and Gillette (painting at the American Museum of Natural History)

Knight biographer Richard Milner notes a profound irony in the artist's life: As a child, he didn't draw dinosaurs. He was born in 1874, and when he was little, few people had a truly accurate idea of what dinosaurs looked like when alive. Yet many of the earliest impressions Americans had of dinosaurs came from his work. Although some of his dinosaur renditions certainly contributed to the view that the ancient reptiles were "stupid, unadaptable, and unprogressive," some of Knight's earliest work was compatible with ideas that would emerge decades later. In 1897, he painted fast-moving Dryptosaurus dinosaurs in a high-energy fight. The "Dinosaur Renaissance" in the 1960s and 1970s would revive the image of dinosaurs shown in Knight's early work.

And whether he painted fast-moving or slow-moving ruling reptiles, he ensured that generations of children would wear out their crayons drawing dinosaurs. That is a life well lived.