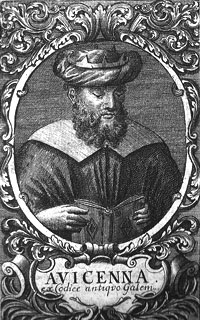 The same historical narrative that argues that medieval Europeans stumbled through a thousand-year fog of incoherence also argues that Greek learning was preserved — though often corrupted — by Muslim scholars. Although they managed to preserve the knowledge of the ancient Greeks, the story goes, the Muslims learned virtually nothing new. In the 16th century, German physician Leonhart Fuchs complained:

The Arabs had taken all their knowledge from the Greeks and, like Harpies, defiled all that they touched. . . . henceforth they will be used very little in the teaching of [medicine], which more advisably will be taught from the wellsprings of the art than by drinking from turbid waters.

Fuchs then made the ironic choice to quote extensively from one of the allegedly defiling harpies: Abu 'Ali al-Husain ibn Abdullah ibn Sina, known in the West as Avicenna. Had ibn Sina heard Fuchs's complaints, he might have had a sharp retort (by most accounts, ibn Sina did not suffer fools) including the item that he wasn't Arab, he was Persian.

Ibn Sina was born in 980 in what is now Uzbekistan, and died in 1037 in what is now Iran. He was born several miles outside of what was then the bustling city of Bukhara. His father headed the government's tax department, and had to master the Indian number system, mathematics, statistics and algebra. When his work required him to travel, he often took his sons along. Ibn Sina's father recognized that the boy was bright, and sent him to work with a vegetable trader, who helped him master numbers and accounting. Later, a philosophy tutor moved into the family home to further the boy's education.

Ibn Sina's accomplishments likely resulted from a combination of native intelligence and incredibly good fortune. As a young man, he hung out with the "golden youth" of Bukhara's elite. But as historian Frederick Starr remarks, "The one great shortcoming of ibn Sina's education was in the area of character." Indeed, the golden boy of Bukhara was arrogant. In a youthful, hotheaded exchange with an intellectual rival, he penned On the Reprimants of a Feces-Eater. Ibn Sina's arrogance never really left him, but from time to time, good luck did. His birth came at a time of decentralization and uncertainty in the Muslim empire. Associated with multiple short-lived sultanates, he relocated often, searching for a stable, well-paying position. At various times, he worked as a political administrator, court physician, soldier — and occasional outcast and prisoner. Though he never married, he was rumored to be attractive, popular with the ladies, and fond of wine.

By some accounts, ibn Sina authored about 400 books and treatises, ranging in length from a few pages to hundreds of pages. By the time he left Bukhara at the age of 22, he had written his first two books. He authored a couple books — one an encyclopedia of philosophical sciences and another on the pulse — in his native language of Farsi, but most books he wrote in Arabic. Just as Latin would later unite European scholars, Arabic served as a universal language of learning, and many Arab and Muslim scholars found it more adept at conveying precise meanings than their native languages. 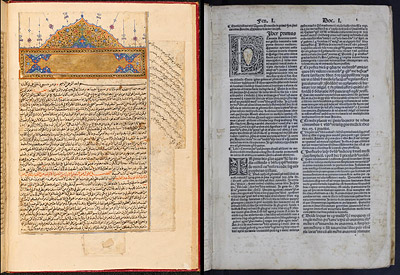 Canon of Medicine in Arabic and Latin. From Bridging Cultures Bookshelf

Probably ibn Sina's most famous book is the five-volume Al-Qann fi al-Tibb, or The Canon of Medicine. It covered basic principles of medicine and medicines available to treat patients, diseases of specific body parts and of the body as a whole, and traumatic injuries. It was first translated into Latin in the 12th century, and translated into Hebrew in the late 15th century. Unfortunately, the encyclopedia lacked pictures. (Islam generally forbade the depiction of human form, though pictures were relatively rare in European books of the time, too.) As a result, the pictures that did appear in The Canon were mostly decorative. The Canon made its way into Europe probably around the mid-11th century, and remained influential there for well over five centuries. The book continued to be consulted in the Muslim world well into the 20th century. 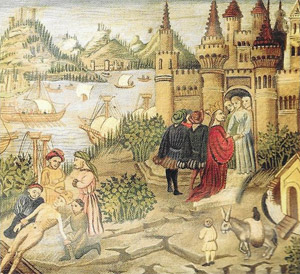 Illustration from a 14th- to 15th-century Latin translation of Canon of Medicine, from 1001 Inventions edited by Salim T.S. al-Hassani

The contention that Muslims preserved the works of ancient Greece was certainly true. Ibn Sina was a follower of Galen's belief in humors: blood (provides vitality), phlegm (cools the body, especially in a fever), black bile (darkens bodily fluids), and yellow bile (aids digestion). Thought to shape personality as well as health, humors had to be kept in balance, leading to the sometimes-deadly practice of bleeding. But ibn Sina was hardly an ineffectual doctor. He became a physician in his teens, and soon won the favor of a local ruler by treating him successfully for a potentially fatal infection. Ibn Sina's reward was access to the royal library at Bukhara. Over the years, he endorsed experimentation, and readily discarded ineffective remedies for better ones. Besides advances in medical care for expectant mothers and children, he recognized the contagious nature of tuberculosis, and the ability of diseases to spread through tainted water and soil. He even became an arguable pioneer in psychology, recognizing the connections between emotional and physical states (he sometimes recommended listening to good music for good health), and examining the role that environment plays in one's health. Kick-starting the field of preventive medicine, he advocated for good exercise and sleep habits. He recommended wine in moderation, remarking, "It is of sharp flavor, like a father's advice, but useful also; permitted to the intelligent, forbidden to fools."

Ibn Sina flowered as a polymath, writing not only about medicine but also philosophy, mathematics, astronomy, alchemy (which he did not respect), geology, even optics. Nuclear physicist and science historian Jim al-Khalili has argued that ibn Sina's greatest work wasn't The Canon but instead Kitab al-Shifa, or Book of Healing. Its title implies it was about medicine, but it was actually a book intended to heal the world of the disease of ignorance, and it was a compendium of knowledge, including philosophy and the natural sciences.

In ibn Sina's day, Muslim scholars were trying to discern how human eyes could see. One idea was that eyes sent out optical energy. Ibn Sina doubted that anything as small as an eye could produce sufficient energy, especially when one considered that the human eye could discern the stars that filled the nighttime sky. Every time an eye was opened, he pointed out, the diminutive organ would have to send out star-reaching energy. He also had the remarkable insight that light consists of particles — an idea that would be echoed centuries later by Newton, and demonstrated by Einstein.

For all his doubt of energy-producing eyes, ibn Sina's likely held even deeper suspicions of alchemy. During his lifetime and for centuries afterwards, scholars and mystics engaged in a sometimes shadowy, secretive practice that alternately aimed for spiritual enlightenment and the manufacture of gold. Ibn Sina didn't buy it. 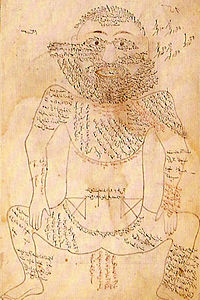 Top: From Arabick Roots issued by the Royal Society
Bottom: From Images of the Body by Philippe Comar

Art is weaker than nature and does not overtake it, however much it labors. Therefore let the artificers of alchemy know that the species of metals cannot be transmuted. But they can make similar things, and tint a red [metal] with yellow so that it seems gold, and tint a white one with the color that they want until it is very similar to gold or copper. They can also cleanse the impurities of lead, though it will always be lead.

For centuries after ibn Sina's death, scholars and savants would puzzle over the origin of fossils. Historical accounts have differed on whether ibn Sina understood fossils to be organic remains of plants and animals. By some accounts, his skepticism over alchemy may have caused him to doubt that a once-living organism could turn to stone. By other accounts, he did. Whatever his views on fossils, he touched upon the topics that would later dominate geology, namely stratification and superposition — younger rock layers resting atop older ones. (This idea of superposition would be spelled out in detail in the 17th century by the European scholar and cleric Niels Stensen, or Steno. Ibn Sina's work has also been said to influence James Hutton and Leonardo da Vinci. Ibn Sina himself grew up around and was influenced by a group of Shiite scholars known as the Brothers of Purity, who produced volumes on the subject in the 10th century.) Ibn Sina observed:

It is possible that the bed of the sea may have been originally in the shape of plains and mountains, and that when the waters ebbed away, they were exposed. It may be noticed that some mountains are in layers, and this may be because each layer was formed at a different period.

As others did, ibn Sina apparently recognized that breaking a rock often revealed shells within it — partial remains of aquatic animals. The sea, he accepted, must have been in places it no longer lingered.

Ibn Sina felt that the universe was governed by physical laws that simply aren't broken, and he was skeptical of miracles — something that drew as much invective from some Muslim scholars as Islam in general drew from the likes of Fuchs. The worst attack on ibn Sina came after his death, delivered by the 12th-century Muslim scholar Abu Hamid Muhammad al-Ghazali. Ghazali partook of the same kind of luxurious life that ibn Sina had enjoyed in his youth, but the death of the sultan who had been Ghazali's patron changed his fortunes. Perhaps after suffering a breakdown, he later claimed to have had a religious epiphany, given up all his wealth, outgrown his desire for status, and become a Sufi (an unusually cranky Sufi). In fact, Ghazali probably had little wealth or status to relinquish at that point. Whatever had happened to his own finances and status, Ghazali railed against ibn Sina in his own treatise, The Incoherence of the Philosophers. Aristotelian commentator Abu al-Walid ibn Rushd, known in the West as Averroes, later penned a direct riposte to al-Ghazali titled The Incoherence of the Incoherence. Ibn Rushd neatly eviscerated Ghazali's work, but it was too late; Ghazali's denunciation of philosophy and science had taken hold in the Arabic-reading world.

Ibn Sina's life came near the end of what had been a centuries-long era of economic and intellectual health in Central Asia. Even before the Muslim conquest of the region — which took decades, thanks to the natives' spunky resistance — the region was littered with big, busy cities, where locals made efficient use of natural resources. But the 13th-century Mongol invasion was perhaps even more devastating in Central Asia than in other places, killing as much as 90 percent of some settlements' residents. Following on the heels of the Mongol invasion was the Black Death, on its way to Europe. By some historians' accounts, the combined invasions of horsemen and germs practically emptied out Central Asia. Still, the intellectual flowering that ibn Sina had been a part of had begun to fade even before the first invaders arrived. Luckily for succeeding generations, some of ibn Sina's books eventually found their way to Europe.

While ibn Sina's reputation would face the occasional attack from European Christians, he would enjoy the occasional defender as well. Bologna professor Girolamo Cardano pointed out the irony of criticizing ibn Sina for being a Muslim when Galen had been an "idol worshiper." Venetian physician Benedetto Rinio likewise pointed out the irony of criticizing ibn Sina's use of earlier work when no one attacked Aristotle or Galen for the same practice.

Beyond mere defenders, ibn Sina has enjoyed real admirers. Royal Society fellow and Cambridge professor Edmund Castell delivered his inaugural lecture on the use of ibn Sina's work in medicine. Today, one of the craters on the moon is named Avicenna. And in 1980, member nations of the United Nations Educational, Scientific and Cultural Organization celebrated the 1,000-year anniversary of his birth.