Darwin aficionados know that when the young explorer boarded the Beagle, he carried with him a copy of Charles Lyell's Principles of Geology. Fewer people know that Darwin was equally inspired by the writings of Alexander von Humboldt, whose writing style he did his best to emulate in his letters home. After he returned to England, Darwin got to meet Humboldt in person, and the younger naturalist found the older naturalist very talkative. Humboldt talked so much that nobody else could get a word in edgewise. It happened often. The author who devoted more than 30 volumes to his book on the New World always felt he had a lot to say. 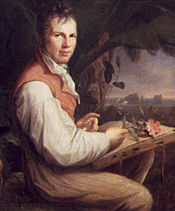 Humboldt's portrait from "Climb Chimborazo and See the World" by Peter J. Bowler

Born in Berlin in 1769, Humboldt entered the world in fairly illustrious circumstances; the future king of Prussia was his godfather. But Humboldt's own father died when the boy was only nine, and while Alexander and his brother Wilhelm were always close, their cold, exacting mother expected Alexander to keep up with Wilhelm's studies, even though the older boy was already advanced for his age. It might have been a defense mechanism Alexander developed early in life, to protect himself from feeling foolish, that he cultivated a sharp tongue. Even his best friends admitted he had a mean streak.

Trying to please his mother, Alexander studied at the universities of Frankfurt and Göttingen, and at the mining academy of Freiburg in Saxony, initially accepting and later rejecting the Neptunism of Abraham Gottlob Werner. Alexander dreamed of nature, but at least the mining school let him study rocks and fossils.

Humboldt's mother died in 1796. Though he reputedly feared her ghost in later years, at the time, he apparently didn't grieve much. Instead, he felt free to do what he wanted with the fortune he had inherited. He didn't care about stylish clothes or fine furniture. He wanted to travel. In the late 1790s, he planned to visit North Africa, but backed away from that plan over worries about travel risks, and instead settled on America. Though he funded the trip on his own, he had to obtain a passport to visit the Spanish colonies. King Carlos IV of Spain eventually granted the young man the necessary papers, and while preparing for the trip, Humboldt picked up a travel companion: Aimé Bonpland. Bonpland's calm disposition and perpetual cheer nicely balanced Humboldt's frantic energy and combustible temper, though Bonpland's slowness in describing the plants they collected would frustrate Humboldt years later. 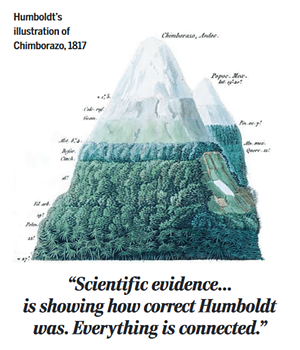 A snippet from a Humboldt infographic with added commentary, from "A Humboldtian View of Mountains" in Science. Published in September 2019, the special issue marked the naturalist's 250th birthday.

From 1799 to 1804, Humboldt and Bonpland explored South America, collecting plants and measuring temperature, air pressure, and the Earth's magnetic field. They trudged through the outdoor oven that was the Llanos plain (it was nicer on the return trip), and climbed every volcano they could reach from Quito. Had Humboldt realized what lay in store for him, he might not have wanted to visit South America any more than Africa. On three separate occasions, newspapers reported him dead. On the Amazon, he contended with mosquitoes so thick they filled his mouth and nose whenever he uncovered his face. The fevers he suffered in the insects' wake were even worse. On the slopes of Chimborazo, his nose streamed with blood from the high altitude, while his feet streamed with blood after rocks sliced away the soles of his shoes. He didn't reach the summit of Chimborazo, but he made it within about 1,000 feet. Without oxygen or decent climbing gear, Humboldt reached an altitude of 19,286 feet — higher than anyone else had ventured before. Undaunted by hardship in South America, he hiked barefoot. When he contracted lice, he scrutinized them through a microscope.

Though he failed to reach Chimborazo's summit, Humboldt achieved something much rarer. He realized that organisms living on mountainsides aren't directly shaped by elevation. Instead, they are shaped by the elevation's climate. Science commemorated Humboldt's 250th birthday with a special issue on mountains and on his research.

Humboldt was convinced that mechanical and chemical forces worked together in perfect harmony to sustain nature, but he wanted to identify those forces. At home and abroad, he combined studies of magnetism, meteorology, ocean tides, zoology, botany, atmospheric chemistry, mineralogy, geology and topography. In one particularly ingenious set of experiments, he interspersed animal muscle tissue with metals and examined the muscle contractions produced by electrical currents. He then tested only nerve and muscle tissue, without any metals, and found they could also generate electrical currents. Humboldt concluded that electrical currents could have a source within living bodies, probably from the brain and nerves. In South America, he did something particularly unsettling. To acquire electric eels for experimentation, he and some assistants herded about 30 horses into an eel-infested lake, trapping the horses there to be shocked repeatedly until the agitated eels exhausted themselves and posed little danger to the humans. Two agonized horses drowned in the first five minutes. They were vindicated somewhat when a not-quite-exhausted eel later shocked Humboldt.

Informed by his New World travels, Humboldt championed the development of topographic maps, which indicate the height as well as spatial distribution of landforms. He also pioneered the calculation of mean elevation of continents, and realized that mountain chains have less impact on the mean elevation of large landmasses than the elevated plains of the typical land surfaces. Much of what motivated these detailed studies was his recognition that altitude affects climate and vegetation. He illustrated the relationship between altitude and organisms with this cross-section of Chimborazo. 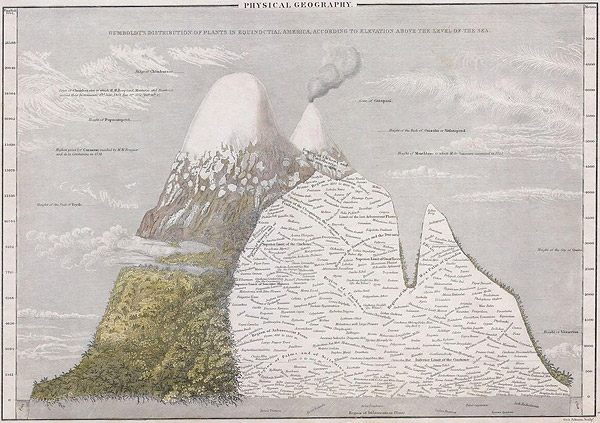 And he listed all the things he hoped to capture in this image:

namely, the vegetation, the animals, the geological facts, the cultivation of the soil, the temperature of the air, the limit of the perpetual snows, the chemical constitution of the atmosphere, its electrical intensity, its barometrical pressure, the decrement of gravitation, the intensity of the azure color of the sky, the diminution of the light during its passage through the successive strata of the air, the horizontal refractions, and the heat of boiling water at different heights.

En route home, Humboldt briefly visited the United States to discuss fossils with America's third president. The belief in American degeneracy — that a colder, wetter climate stunted New World inhabitants — remained fairly widespread when Humboldt visited South America. His rejection of that idea, and his discovery of mammoth teeth in the Andes, endeared the young naturalist to then-president Thomas Jefferson.

Humboldt finally returned to Europe with some 60,000 plant specimens, including about 2,000 species new to European naturalists. Though his home was officially Berlin, he preferred Paris. He managed to live there for years as a representative of Prussia's Friedrich Wilhelm III. Humboldt burned with revolutionary spirit, which Paris only intermittently satisfied. Napoleon's rise meant less freedom of expression, and Napoleon showed a particular dislike for the naturalist. Science writer Andrea Wulf speculates that Napoleon resented the man whose writings on the New World rivaled the written works about the French conquest of Egypt, and Napoleon had had an entire army to help him. 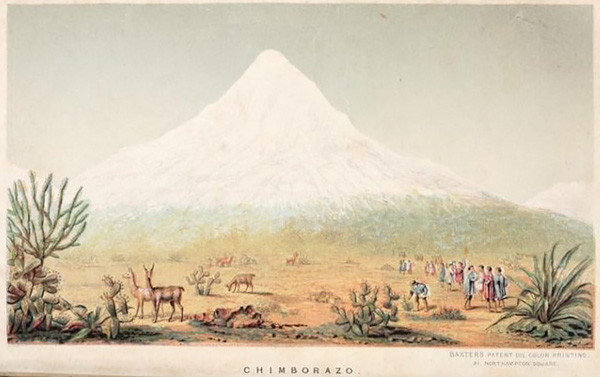 A view of Chimborazo in Humboldt's Views of Nature. From the Biodiversity Heritage Library.

As someone who didn't admire Humboldt, Napoleon was a rare case. Most people couldn't get enough of the naturalist, explorer and writer. Despite the Napoleonic Wars, Humboldt remained on friendly terms with the British, especially Joseph Banks. During one of Humboldt's visits to London, Banks invited him to eat at the exclusive Royal Society Dining Club. Humboldt enjoyed British attention and hated British food.

Easy on the eye, Humboldt suffered no shortage of female admirers, but he didn't reciprocate their affections. Instead he had a string of intense friendships with other men. This has led to speculation about his sexuality, though he didn't seem to feel any passion for his travel companion Bonpland.

Humboldt's travels in South America, and his writings about the expedition, made him famous. Understandably, he didn't want to think his adventures were all behind him. He wanted desperately to visit India and see the Himalaya. He never made it. But in the 1820s, he was invited by the Czar to explore Russia. By then, Humboldt was 60, an old man by contemporary standards. That didn't stop him.

Russia had a pretty good road system for the time, and Humboldt's party kept moving round the clock, him sleeping in the carriage while drivers worked the horses as hard as they could. After reaching the destination he was hired to visit, he extended the trip by thousands of miles, getting away with it because his overseer was too far away to stop him. Humboldt's party kept moving through stifling summer heat, clouds of insects and an Anthrax outbreak. Keeping up the breakneck pace meant changing horses constantly. In the end, the expedition party used 12,224 horses. After the travels, he suggested setting up geomagnetic observation stations, and his idea was implemented, with stations scattered across Eurasia and America.

Humboldt drove himself as hard as a writer as he had as a traveler, exhausting his own financial resources and those of three publishers in documenting his trips and his observations of Earth systems. Humboldt also pioneered vegetation maps, and developed the concept of the isotherm, linking areas with similar temperatures on maps. Twenty-first-century research continues to back him up; globally, the treeline conforms to a mean temperature of 43°F (6°C) during the growing season.

In yet another instance of astute reasoning, he attributed the dropping water level in Lake Valencia to climate change caused by deforestation. He foreshadowed Darwin's theory of natural selection by noting how parents in the wild produced far more offspring than could possibly survive. Capybaras struck his as especially fecund. The ecologically minded traveler also noted how the Mauritia palm tree provided shelter to some animals and food to others, something later known as a "keystone species" crucial to ecosystem health. 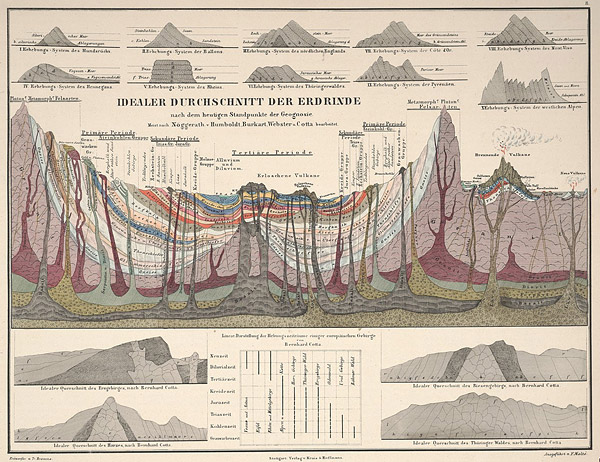 Infographics from Humboldt's published works: rock strata (top), Earth's tallest mountains in relation to their distance from the Equator (middle), and vegetation zones of famous mountains (bottom). From Botanicus.

For all his contributions to natural sciences, his writings on the political and economic conditions of Mexico may have brought him more fame. He lived, traveled and wrote at a time when many people of European descent believed that the Earth was theirs to conquer, control and "reclaim" from nonwhites. He advanced a different view. He was variously considered a Romantic, a product of the Enlightenment and a radical. In Paris, he shared his reformist zeal with Simón Bolívar, the revolutionary who led uprisings throughout Latin America but who, to Humboldt's disappointment, eventually became a dictator. Part of the reason Humboldt never got to visit India was that bosses of the British East India Company objected to his rants against colonialism. When a pro-slavery publisher in the U.S. South released an English edition of Humboldt's Political Essay on the Island of Cuba and conveniently forgot to include Humboldt's writings on slavery, the aging naturalist issued a press release pointing out that his writings on slavery were the most important part of the book.

While many naturalists and politicians argued that humans couldn't all be one species, Humboldt argued that we most certainly all were, with human ability distributed pretty equally across the globe. His last great work, Kosmos, discussed the history of science and examined the effects of artistic perceptions on human interpretation of nature. His exceptional memory had always enabled him to write and illustrate natural concepts so thoroughly, but his memory was starting to fail him by the time he wrote Kosmos. He pressed on anyway. He died fairly poor, known for dressing in clothing decades out of date. Nobody minded. Humboldt passed away at the age of 89. The centennial of his birth was celebrated around the world.