In The Histories, Herodotus described the conflict between his own people, the Greeks, and the Persian Empire. While telling the story of their own civilization in conflict with another, many people would be inclined to take sides, but Herodotus strove to show each side's perspective in the struggle. His impartiality provoked some of his fellow Greeks to call him a "barbarian lover." In this, he was like the great poet Homer, but Herodotus innovated even further. Homer wrote his epic as if narrated by a goddess; Herodotus spoke with his own voice, and relayed his own experiences and research. 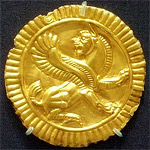 Griffin rendered in gold. Photographed by Kotomicreations (some rights reserved)

Before Herodotus, accounts of important events had been the purview of royalty, minstrels and priests. Perhaps his innovation in relaying information was partly responsible for his reputation as the "Father of History" and for his less flattering reputation as the "Father of Lies." Historians of classical antiquity suspected Herodotus of passing along hearsay, and perhaps even inventing tales for his own amusement. Even less damning assessments called him misguided.

Born the fifth century BC, Herodotus passed his childhood in the Greek city of Halicarnassus in what is now Turkey. It was a city of mixed ethnicity, and many of its residents had fought on the side of Troy in the Trojan War. Maybe the mixed ethnicity lent Herodotus some open-mindedness — and prepared him to write about the new war in which more Greeks fought for the Persian ruler Xerxes than against him. Conflict may have driven Herodotus out of Halicarnassus, and he likely spent years in exile due to regional wars.

Herodotus was — if his claims were truthful — a widely traveled and well-read historian, yet he passed along tales of mythical griffins, flying dragons and gigantic heroes. His account of the phoenix — the mythical bird that lives for centuries and is consumed by and reborn in fire — is considered the bird's introduction to the West, although he may have borrowed from an earlier account, and he expressed his doubts about its existence from the start. The Histories were littered with snippets that beggar belief. He wrote that pacifist Argippaeans were born bald and stayed bald all their lives and ate only the fruit of one type of tree. He argued that a lioness could have only one cub in her entire life since the cub's claws would tear up her womb, and he wrote that the hippopotamus had the mane and tail of a horse. He wrote that ibises were useful because they killed "winged snakes."

Like many who would follow, Herodotus was fascinated by Egyptians, guessing they had discovered more cool things than all other cultures combined. He believed that Egyptians had compiled a written history extending back 11,000 years before his own time, not impossible, but certainly something that would push back the known advent of writing by several thousand years.

Though he exceeded the impartiality of those who had preceded him, he was still a product of his culture and never doubted it was the best, arguing that climate makes character and, situated as it was between the harsh north and soft, hot south, Greece was the perfect character cauldron.

Was he simply a liar? In fact he exhibited a healthy skepticism, prefacing many accounts with phrases such as "I believe," "I can't say," "it seems likely," "it seems unlikely," and "the first of whom we know." He liked firsts, but he also liked caveats. And modern finds in paleontology and archaeology suggest his claims had at least some basis in fact. Historian Jennifer Roberts writes:

Specialists who can read languages that stumped Herodotus have discovered that the ancient texts confirm his findings more often than they refute them. . . . The most natural explanation by far of his astonishing rate of success is that, by and large, he went where he said he did and thought he had seen what he said he had, although misperception and faulty memory inevitably played a role.

Phoenix depicted on an imperial Roman coin. From The Phoenix by Joseph Nigg

In his writings, Herodotus often digressed, sharing what he learned from interviewing those he met, and creating some of the more interesting parts of The Histories. He interviewed Scythians living near the Black Sea about their lives, for instance. He also asked them what they knew about the lives of other nomads living farther east. In some cases, Herodotus relayed information that had been through several translations (he knew only his native Greek) yet, remarkably, modern excavations in Russia and Kazakhstan have found artifacts similar to what he described.

Regarding mythical creatures, Herodotus believed that some legends he heard preserved a kernel of genuine fact, and he helped spread the legend of the griffin. Griffins, according to the nomads he interviewed, were four-legged and lion-sized, with wings and sharp beaks. What might the nomads have seen that prompted these myths? Modern paleontological digs in the region have revealed fossil skeletons of Protoceratops and Psittacosaurus dinosaurs. The nomads of his time may have seen similar skeletons eroding out of the sediments along the Silk Road. These weren't the only potential fossils mentioned in Herodotus's works. The giant skeletons of heroes he discussed may well have belonged to fossil mammals from the Miocene, Pliocene and Pleistocene epochs. When in Egypt, he wrote, he was shown piles of "bones and spines." These may have belonged to spinosaurs, large Cretaceous reptiles with dorsal membraned spines, or to pterosaurs. He apparently observed more mundane fossils in Egypt: disk-shaped objects in the blocks comprising pyramids. He figured they were lentils spilled while feeding the workers; they were actually fossil foraminifera.

Herodotus mentioned at least one unambiguous fossil find. "I have seen shells on the hills," he wrote of Egypt. He reached a conclusion that is common today: The area "was originally an arm of the sea." Herodotus also ventured into the field of geology, guessing (inaccurately) that in the recent geologic past, Egypt had been a gulf of the sea. Although he was wrong about Egypt's geology, he was right in concluding that the world we live in changes over time, thanks to natural processes. And he provided a thoughtful analysis:

In Arabia, not far from Egypt, there is a long and narrow gulf running inland from the sea called the Erythraen [perhaps the Gulf of Suez]. . . . Now if the Nile should choose to divert its waters from their present bed into this Arabian gulf, what is there to hinder it from being filled up by the stream within, at the utmost, 20,000 years? For my part, I think it would be filled up in half the time. How then should not a gulf, even of much greater size, have been filled up in the ages that passed before I was born, by a river that is at once so large and so given to working changes?

Far from a simple father of lies, Herodotus was arguably the world's first anthropologist, who also made inroads in geology, even though he didn't practice science as we know it today. His idea of history was soon superseded by that of Thucydides, one of his contemporaries, but a younger one. Whereas Herodotus gathered information from a wide swath of people — including poor laborers, women and non-Greeks — Thucydides concluded that history should focus solely on powerful men doing important stuff. It took some 2,000 years for a rehabilitation of Herodotus's reputation.