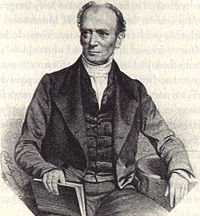 From Darwin and the Barnacle by Rebecca Stott

Robert Grant was born near the end of the 18th century, the seventh of 14 children. As a young man, he read Erasmus Darwin's Zoonomia and believed, as Erasmus Darwin claimed, that life on Earth "had arisen from one living filament." Grant resolved to find out what that one living filament was. Like other transmutationists of the time, he was confident that the organism that gave rise to other forms had lived in the sea.

When Grant was 15, his father died, dividing the family inheritance between his surviving children. Grant's share was enough to give him financial independence, but only for a few precious years. After earning a degree as a doctor, he left England for Germany, France and southern Europe to soak up wisdom from the likes of Cuvier, Lamarck and Geoffroy Saint-Hilaire. As the writings of Erasmus Darwin had done, Lamarck impressed upon the young man that understanding marine invertebrates would lead to understanding the origin of life on Earth. Meanwhile, Geoffroy Saint-Hilaire and Cuvier convinced him of the importance of dissection. Imparting this lesson on Grant was perhaps something Cuvier came to regret. Grant's dissections eventually disproved some of Cuvier's contentions, namely that the different embranchements (branches of life) Cuvier had established weren't as separate that he had claimed. Just like humans, Grant demonstrated, cuttlefish and sea slugs had a pancreas. At any rate, Grant settled on studying the sea sponge.

Until the 1820s, the sea sponge was considered a plant, not an animal. Grant devoted several years to studying and publishing on sea sponges. He noted that they excreted fluid — evidence of digestion. He also found that, even if the sponges themselves could not move, their ova could, through the use of cilia. Between 1825 and 1827, he published his findings and hypotheses about sea sponges in a series of articles.

During this period, Grant met the young Charles Darwin, who was a medical student in Edinburgh. The two hunted marine invertebrates in the Firth of Forth, the estuary of several Scottish rivers. Grant taught Darwin to dissect sea creatures under the microscope — outside, while they were still in their native habitat. The two worked well together, Grant enthusiastically telling Darwin about the impact Erasmus Darwin's theories had on him. At the time, the young Darwin was not yet convinced of the mutability of species, but 50 years later, in his autobiography, he recalled how Grant "burst forth" about Erasmus Darwin's ideas.

Unfortunately, Grant and Darwin had a falling out; Darwin discovered (as Grant probably also did) voluntary movement in zoophyte eggs, and when Darwin excitedly informed Grant, Grant felt the young man was encroaching on his own research, though he later did credit his "zealous young friend Mr. Charles Darwin" when he published. In the short term, through, Grant undercut Darwin. Days before Darwin delivered his ova paper to the Plinian Society, Grant read a similar paper to the Wernerian Society, and did so without Darwin's knowledge. Darwin never got over the shock of what he considered Grant's selfishness. The two did not remain close, though Darwin called on Grant for advice on preserving specimens before departing on the Beagle.

Grant's open endorsement of transmutationism eventually cost him dearly. In later years, he worked as a professor at London University, but since the subjects he taught weren't compulsory, there weren't enough fee-paying students to fund a decent salary. So despite being expected to deliver some 200 lectures a year, he barely made enough to survive, and he wound up living in a slum. Even worse, the enormously influential Richard Owen found Grant's Lamarckism distasteful, and dropped enough derogatory comments about Grant to the right people to oust Grant from the Zoological Society. Grant could have supplemented his meager income working as a doctor, but he was a Scotsman, and was too proud to take the set of exams particular to medical practice in London that Scots were expected to take. Grant managed to survive a long time in the professional world when transmutationism was disdained, but it would be Grant's former student, Charles Darwin, who would propose the theory that Owen's influence couldn't crush.