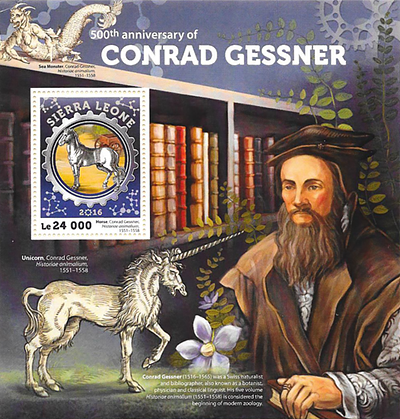 Conrad Gesner (sometimes Konrad, sometimes Gessner) lived not quite half a century, but in his relatively short life, he earned a reputation as the greatest naturalist of his age. He churned out encyclopedias on plants, animals, rocks and fossils, many of the descriptions based on specimens in his own collection. Today, his brand of science seems quaint, but science was different then.

In 1516, Gesner was born into humble circumstances in Zürich, Switzerland. Despite his family's poverty, Gesner was lucky to have people in his life who recognized his talents and wanted him to succeed. His furrier father sent the boy to live with a relative who could give him access to a better education. He studied at a seminary and later at French universities. Scarce employment and family tragedies kept Gesner on the move, but he eventually studied medicine at the University of Basel, and became a physician. In his free time, he studied nature.

Between 1551 and 1558, Gesner published a four-volume masterwork, History of Animals. The first volume covered four-footed animals, the second covered amphibians, the third covered birds, and the fourth covered fishes and other aquatic animals. He incorporated observations of both classical scholars — relying heavily on a bestiary, Physiologus, likely dating from the fourth century AD — and his contemporaries. Some of his contemporaries were obscure experts, and some of them were just superstitious rubes. He often assured his readers, however, that his friends' testimony was reliable, as they had personally eyeballed even the most ferocious beasts, including lions and crocodiles.

Gesner's work was possible in a large part due to the web of correspondence he established with leading naturalists throughout Europe who, in addition to their ideas, sent him plants, animals and gems. He reciprocated the courtesy — and kept helpful specimens coming — by naming plants after correspondents and friends. 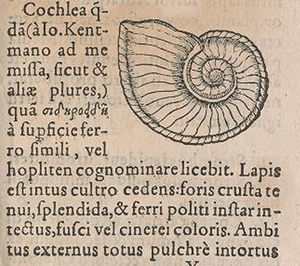 From De Omni Rerum Fossilium at the Biodiversity Heritage Library

Gesner's own Protestantism secured History of Animals a spot on the Catholic Church's Index of Prohibited Books, but at a time of extreme religious tension, he maintained friendships on both sides of the Catholic-Protestant divide. In fact, Catholic booksellers in Venice protested the Inquisition's blanket ban on Gesner's books, and some of his work was eventually allowed after it had been "cleaned" of its doctrinal errors.

Despite vowing to climb at least one mountain each year of his life, enjoying the scenery and collecting samples on his way up the slopes, and despite maintaining his own gardens, Gesner probably spent most of his time inside his own library. Exceedingly well read, he listed among his History of Animals sources more than 80 Greek authors and at least Latin 175 authors, as well as works by German, French, and Italian authors. He even attempted to establish a "universal library" of all books in existence. The project might sound quaint to the modern mind, but Gesner invested tremendous energy in the project, sniffing through remote libraries as well as the collections of the Vatican Library and catalogs of printers and booksellers. In assembling his universal library of information, Gesner put together a database centuries before computers would ease such work. He cut relevant passages out of books, grouped the cuttings by general theme, subdivided the groups into more specific categories, and boxed them. He could then retrieve and arrange the cuttings as needed. In the words of science writer Anna Pavord, "He was a one-man search engine, a 16th-century Google with the added bonus of critical evaluation." To his contemporaries, he was known as "the Swiss Pliny."

When Gesner doubted the accuracy of the opinions he relayed in his own writings, or the validity of the illustrations he included, he prudently said so. Of the multi-headed hydra, for instance, he observed, "ears, tongues, noses, and faces are inconsistent with the nature of serpents." What would strike a modern reader as strange, however, was his inclusion of proverbs related to the animal in question, along with any appearances it made in the Bible, pagan mythology, or even Egyptian hieroglyphs. In other words, he included every piece of information he could find about the animal, useful or not. Besides any plant or animal's potential utility to people, Gesner advocated learning about them because of the moral lessons they could impart, and the divine truths they might tell. And he went into as much detail about some unreal animals as he did about real ones.

From The Meaning of Fossils by Martin J.S. Rudwick

Tidbits he passed along about apes included the curious claims that they live mostly in hollows eating apples and nuts, that one of their number in England once defended a bunny from a weasel, and that baboons enjoy the milk of sheep and goats. Of the seal's fur, he wrote:

Its hair is reputed to be of such a wondrous nature that the skins or belts are worn by mariners. When thunderstorms, tempests and other inclement weather is nigh, the hair shall rise and bristle, but when it turns still and mild, it shall lay down smoothly.

But if the natural history of Gesner's day encompassed every possible way in which people related to animals, his inclusive approach to his research was considered entirely appropriate.

Just as Gesner's approach to natural history might surprise a modern reader, it likewise surprised 16th-century readers with an innovation: pictures. Previously, most (not all) natural history texts were just that — texts. Gesner, in contrast, included beautiful woodcuts in his. (He credited the artist Lucas Schan of Strasbourg, but the naturalist probably collaborated with a few other artists, and drew his own illustrations as well. He supervised his artist collaborators very closely.) The woodcuts not only made his work more appealing, but also less ambiguous as he recognized the value of both words and pictures to relay information.

Plant illustrations in Gesner's works included all aspects of the plant, including magnified seeds and pictures of bulbs. He also produced time-lapse plant studies, including different stages of growth and flowering. Rather than trying to accurately depict any individual plant, he aimed for "perfect plant" illustrations showing how it would look under ideal conditions. 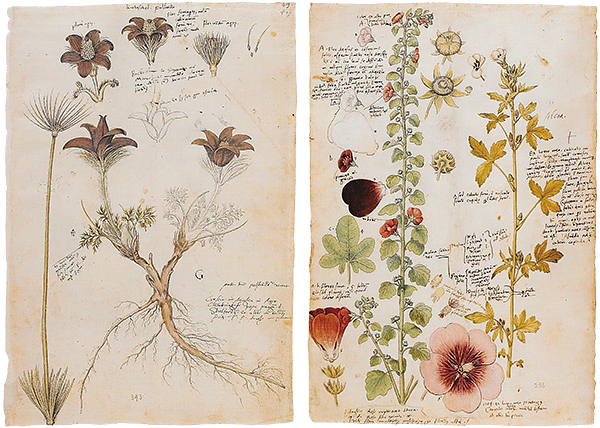 Gesner's plant studies of the pasque flower and hollyhock, from Eye for Detail by Florike Egmond

He continued his illustration-rich approach in his book De Omni Rerum Fossilium ("A Book of Fossil Objects") where he emphasized the value of an object's form in classifying it. In this book, the similarities between a fossil crab and a living specimen are easy to see. For a lucky few, the pictures could even come in color, but this was a time-consuming and expensive process as it had to be done by hand. He wasn't the first to present pictures of fossils, but his numerous woodcuts were greatly appreciated. In fact, the pictures themselves became as valuable — maybe even more valuable — than the objects they illustrated. Another scholar, Felix Platter, carefully cut illustrations out of Gesner's books and pasted them into books he compiled to classify natural objects. And in the copyright-free era, Gesner's illustrations often appeared in the works of others, just as he occasionally borrowed for his own works, such as Dürer's rhino illustration. Gesner often went to the trouble to include the provenance of a particular picture, documenting whose hands it had passed through before reaching his own. He aimed for great illustrations, but when there were none to be found, he ran with whatever he could get. It's possible that part of his motivation for writing his fossil book was to encourage readers to send him specimens, or at least pictures, of pretty fossils he could include in a follow-up work. 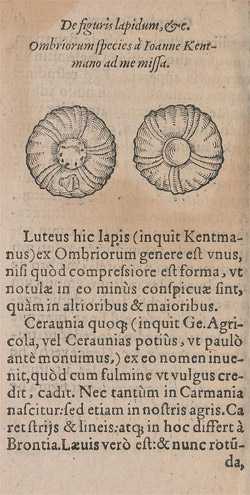 From De Omni Rerum Fossilium at the Biodiversity Heritage Library

The full title of Gesner's final book was A Book on Fossil Objects, Chiefly Stones and Gems, their Shapes and Appearances. In Gesner's time, a fossil was any interesting object found in the ground, including items of inorganic origin. When it came to guessing at the organic origins of fossils, Gesner had a mixed record. Fossil sea urchins, for example, he sometimes attributed to sea urchins and sometimes classified as snake eggs. In his book, he divided the fossils he described into 15 categories. Gesner was a smart man and a thoughtful scholar, but his taxonomy was this:

Gesner apparently liked specific, thorough categories and titles. In 1556, he published a pamphlet entitled Little Commentary on Rare and Admirable Plants Called Lunariae, Either Because They Glow at Night or for Some Other Reason.

Gesner planned a major work on plants, vowing to write about them "more briefly and more crisply than I have done in my history of animals." In studying plants and preparing for that work, he filled more than 200 shelves of his home with pictures, assembled herbarium pages of dried plants, and filled in the margins of other naturalists' herbals with illustrations of his own. Gesner likewise intended for his On Fossil Objects to be a prelude to a much larger work, but the year he published that book proved to be his last. In 1565, he died of the plague, his follow-up fossil book and plant book uncompleted. According to legend, when he knew his time was near, he asked to be taken to his library where he had spent so much of his life, to die among his favorite books. At the time of his death, Gesner had published 72 books, and written 18 more unpublished manuscripts. His work on plants was not published until centuries after his death.