In 1995, Current Biology published a review article aimed at a specialist audience in developmental biology. The article's bibliography included 16 references to papers published between 1991 and 1995, and one reference to a paper published in 1822. The same month, a news and views article in Nature explained that recent findings in biology had vindicated the same man who had authored the 1822 paper.

The vindicated scientist was French naturalist Etienne Geoffroy Saint-Hilaire, born in 1772. Hoping he would enter the priesthood, his parents had his scalp shaved like a monk's when he was just 12. Like many earnest attempts to turn out a lifelong believer, the ardent religiosity of his upbringing came to nothing; revolutionary ideas turned him away from a life in the clergy, and he wound up working at the newly created Museum of Natural History with Lamarck. While Lamarck concentrated on bugs and microbes, Geoffroy Saint-Hilaire was in charge of quadrupeds, reptiles, birds, cetaceans and fishes. In 1795, Geoffroy Saint-Hilaire brought a new friend to Paris: Georges Cuvier. At least they were friends at first.

The men also differed in their interpretation of anatomy, and while Cuvier took a more defensible position based on evidence available at the time, Geoffroy Saint-Hilaire had big ideas that proved true in the long run, even if he made some strange arguments. Their disagreements transformed into a very public rivalry around 1830. The dispute ended only with Cuvier's death and even then, it didn't really end. Cuvier's former students disparaged Geoffroy Saint-Hilaire's work.

At issue was whether species change over time. Cuvier held firmly that they do not. Arguing that function drives form, Cuvier divided the animal world into four "embranchements": vertebrates, mollusks, articulates (such as insects and crustaceans), and radiates. Cuvier insisted that the different embranchements absolutely could not be related to each other. Little by little, Geoffroy Saint-Hilaire showed that they absolutely could. He started fairly modestly, with vertebrates, writing in 1796:

It seems that nature is confined within certain limits and has formed living beings with only one single plan, essentially the same in principle, but that she has produced variation in a thousand ways in all her accessory parts. If we consider one class of animals in particular, it is there especially that her plan will be most evident: we will find that the divergent forms under which she was pleased to make each species exist all derive from one another. 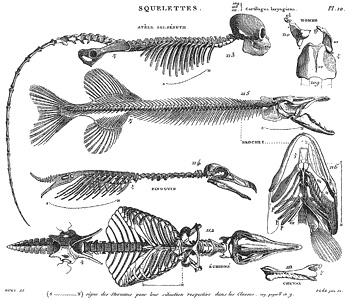 Geoffroy Saint-Hilaire volunteered to travel with Napoleon's army to Egypt in 1798, and stayed there until 1801, after Napoleon abandoned the troops and returned to France. He claimed that he tuned out the noise and suffering around him to study nature, especially fish, crocodiles, and animals mummified by the ancient Egyptians. But the young naturalist succumbed to a nervous illness, and his friends worried about his health.

The mummies initially convinced Geoffroy Saint-Hilaire that species don't change. Later studies changed his mind. And his expertise about crocodiles enabled him to critique Cuvier's rather shoddy analysis of fossil crocodiles found at Caen. Cuvier classified one crocodile fossil as a gavial then described all the ways it differed from a gavial before restating that it was a gavial. Geoffroy Saint-Hilaire instead argued that the differences between the fossil and a modern-day gavial suggested that organisms might change over time.

Something that brought about Geoffroy Saint-Hilaire's change in approach was extensive experimentation with chick embryos. He didn't accept the Lamarckian view that acquired characteristics could be inherited, but he did realize that environmental changes could affect embryonic development. (He also anticipated the somewhat misguided recapitulation arguments later advanced by Ernst Haeckel.) Yet it would be a mistake to think of Geoffroy Saint-Hilaire as an evolutionist in the modern sense of the term. Whereas Darwin saw species as having history, Geoffroy Saint-Hilaire instead saw the only the Earth as having a consequential history. In his view, there was a particular path for life to follow, from simple to complex. But in order for the complex potential to be realized, the Earth had to provide the embryo with the right conditions, which would more likely occur later rather than sooner.

What Geoffroy Saint-Hilaire argued, something now widely accepted, is that organisms are related. Starting with relations between vertebrates, he later expanded his scope. He posited an evolutionary relationship between vertebrates and arthropods (bugs). You might remember hearing in school that, while we have our skeletons on the inside, bugs have their skeletons on the outside. Geoffroy Saint-Hilaire went a step further: bugs don't just live inside their skeletons, they live inside their vertebrae. Cuvier and his supporters smirked then; plenty of people smirk now. Geoffroy Saint-Hilaire didn't stop there. When two young biologists submitted a paper for review arguing that cuttlefish look like vertebrates doubled back on themselves, he stepped in, largely rewrote their paper, and argued for a relationship between mollusks and vertebrates. The young biologists got so uncomfortable with his hypothesis that they withdrew their own names from the paper. Geoffroy Saint-Hilaire was undaunted, and Cuvier was incensed. The arguments turned public.

Bugs living inside their vertebral columns and mollusks resembling vertebrates through fun house mirrors all sounds strange, and yet Geoffroy Saint-Hilaire was onto something: shared ancestry. Among the libraries full of evidence for evolution today are similarities at a molecular level between diverse life forms, specifically that we have the same building blocks of DNA and RNA. But the evidence in agreement with Geoffroy Saint-Hilaire's ideas include two — more specific — things.

One discovery involves that of Hox genes, which started to be understood in the late 20th century. Hox genes are like genes with careers in management that don't care what kind of company they're managing. They instruct entry-level-employee genes to do their tasks, and tell them where to do it. Whether in mice or mites, Hox genes give orders like, "All you guys who make the head, go to the front of the line and make the head. All you guys who make the butt, you go to the other end of the line and do your thing. Front legs, arms, and wings, you're next to the head team . . ." The underling genes then make the appropriate body part in the assigned spot. Bossy Hox genes might irritate their underlings, but they do serve an important purpose. Put on a lab coat and mess with Hox genes, and you wind up with a fruit fly with legs growing out of its head. Gross.

The other insight of Geoffroy Saint-Hilaire's that has withstood the test of time relates to fronts versus backs in bugs and vertebrates. He realized that the internal organization of a bug is very much like the internal organization of a vertebrate, just backwards. Whereas our spines run down our backs, bugs' nervous systems run down their bellies. In short, if you were a nauseated bug, you'd have a backache. The system for organizing the nervous and digestive systems likely arose in a common ancestor.