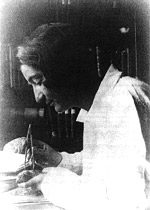 From "The Gospel of the Fossil Brain: Tilly Edinger and the Science of Paleoneurology" in Brain Research Bulletin by Buchholtz and Seyfarth

In December 1940, at the founding meeting of the Society of Vertebrate Paleontology, only one woman participated. Her name was Ottilie ("Tilly") Edinger, and her lone-female presence at the SVP was just one of many remarkable episodes in her life.

Born in 1897 to an affluent German Jewish family, Edinger was the daughter of comparative neurologist Ludwig Edinger, who founded a neurological research institute, and social activist Anna Goldschmidt. Until Tilly was 12, her parents had her tutored at home, in part by English and French governesses, and that exposure to foreign languages served her well years later. At 12, she started studying at the Schiller-Schule, the only secondary school for girls then operating in Frankfurt. She went on to study at the Universities of Heidelberg, Frankfurt and Munich.

Edinger characterized her college experience as unhappy until she changed her focus from zoology to paleontology. She completed her doctoral dissertation on a Mesozoic marine reptile, Nothosaurus, in 1921. While preparing her dissertation, she came across a skull with a natural brain cast that preserved the external brain anatomy very well. She was hooked. Her fixation wasn't just fossils, but fossil brains.

Before Edinger entered the field, the study of ancient animal brains was largely limited to comparisons between extant animals, and the study of serendipitous finds of natural casts. Edinger began systematically studying brain casts in museum and university collections in Europe and North America. In 1929, she published Die fossilen Gehirne, an extensive review of fossil brains. Nearly 20 years later, the Society of Vertebrate Paleontology would vote unanimously to insist that she update and translate the work into English, a time-consuming and expensive endeavour on her part. She became the pioneer and eventual chronicler of paleoneurology.

While she practiced paleontology in Germany, Edinger paid a brief visit to Brussels every couple years, where she was mentored by the vertebrate paleontologist Louis Dollo, until he suffered a stroke in 1929. Early in her career, she was also an ardent proponent of the brain-evolution hypotheses of O.C. Marsh, namely that all mammals from the early Cenozoic had small brains, and that brain sizes gradually increased during that time. With more data, experience and confidence, Edinger transformed from Marsh apostle to Marsh critic. She concluded that brain size in animals with different evolutionary histories and body sizes really shouldn't be compared. In fact Marsh and Edinger were arguably both trumped by later research, including work published by Harry Jerison in the early 1970s. Edinger and Jerison carried on a long correspondence, and he urged her to examine mathematical brain-to-body-size relationships in her research, but she considered his work beyond her ability to comprehend, writing, "As I never can understand formulas and logarithmic graphs, I do not understand yours."

Edinger's career began in Germany, but didn't end there. After graduation, she worked at the Geological Institute of Frankfurt University and at the Senckenberg Museum of Natural History. The Senckenberg was a private institution, and her position there was unsalaried — two factors that enabled her to continue working longer than many Jewish researchers. She also developed skill in staying out of site, entering the museum through a side door, and removing her nameplate from her office door. She was reluctant to leave the country where her mother's family had lived since 1560, but by the late 1930s, Nazi propaganda and racial laws had effectively restricted her to her home. She was lucky enough powerful friends. George Gaylord Simpson described her as a "research scientist of the first rank." With help from such friends, she secured a U.S. visa, despite immigration limitations imposed by the Immigration Act of 1924. She also secured a Harvard appointment. En route to the United States, she had to wait awhile in the United Kingdom where she worked as a translator, but in she finally reached New York in May 1940.

Leaving Germany meant leaving behind considerable inherited wealth, but Edinger squeaked by financially, and enjoyed the informal, friendly environment at Harvard. She marveled at being on a first-name basis with American colleagues — something she could not expect in Germany. An exchange with colleagues, Glenn "Jep" Jepsen and Brian "Pat" Patterson, over the identification of a fossil brain case from the Paleocene illustrates the friendly environment. Jepsen penned a poem in Edinger's honor.

A curious beast is the Tillybat
It surely seems odd and quite silly that
With a brain shape so batty,
We'd find glenoids so catty!
You see why we call it a dilly, Pat?
"The midbrain is hilly, —
and further", says Tilly,
"Look here quick and see
Those colliculi!
It had to squeak, not mew, —
it never walked, it flew!
Jep, don't be so placid,
It's not a miacid!"

From being the lone female at the founding meeting of the Society of Vertebrate Paleontology, Edinger went on to become the society's first female president in 1963. She also received a number of honorary doctorates, including one from the University of Frankfurt. Despite the dire conditions that forced her exile, Edinger made multiple visits to her home country after World War II.

Despite the recognition and friendly work environment she enjoyed in the United States, Edinger became somewhat isolated by a physical ailment: early-onset deafness. She began losing her hearing in her teens. She had a hearing aid but didn't always turn it on, and probably missed out on some of the informal give-and-take that spurs new ideas. By the late 1930s, her hearing was so bad, she needed to sit near the front of the room in professional meetings, but didn't dare site where she would be noticed. Fear of passing on the ailment might have played a role in her decision not to marry, and the deafness likely played a role in her death. She probably did not hear the approaching truck that hit her as she walked to Harvard's Museum of Comparative Zoology. She died of head injuries on May 27, 1967.