In 1836, the Natural History Society of Moscow awarded membership to an Englishman. Even better, Czar Nicholas I awarded the Englishman an honorary Doctorate of Civil Law from the University of St. Petersburg, after receiving an impressive selection of the gentleman's fossils.

There was just one problem. The distinguished Englishman was a woman.

Etheldred Benett's first name was one letter off from a name commonly applied to men: Ethelred. She had neither a feminine name nor avocation, so it's not surprising that, at a time when few women could participate in scientific societies, she should be mistaken for a man by foreign officials. But gentlemen geologists who cited her in their own books and papers often referred to her as Miss Benett, confident their colleagues would know exactly who they meant. 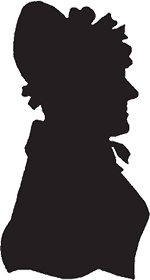 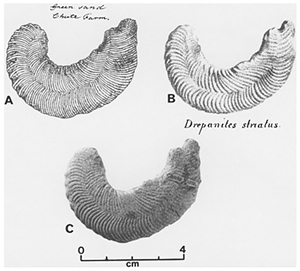 Three pictures of Drepanites striatus, a type specimen in Benett's collection: a sketch by Benett in a letter to Mantell (A), a lithograph from her 1831 catalog (B) and a modern photograph (C). From "Recovery of the Etheldred Benett Collection" by Bogan and Torrens in Proceedings of the Academy of Natural Sciences of Philadelphia.

Benett was born in 1775 or 1776, meaning she was old enough to be the mother of Mary Anning, the other notable female fossil collector of the age. But Benett had advantages Anning lacked, namely a well-connected family and independent wealth. Etheldred and her sister Anna both received encouragement from Aylmer Bourke Lambert, a geologist and botanist who was a family relative by marriage. Anna focused on plants while Etheldred focused on fossils. She never married, and lived most of her life in the family home in western Wiltshire. Though she occasionally suffered from ill health, and had to contend with family matters, she had time to pursue her interests. According to Deborah Cadbury, Benett's carriage was a common site near the county's good fossil localities.

Benett studied geology as well as fossils. She produced a stratigraphic section of Wiltshire's Upper Chicksgrove Quarry, and gave it to the Geological Society of London in 1815. She sent corrections to the Society a year later, though naturalist James Sowerby didn't credit her when he published the stratigraphic section. In fact, the strat section was published without her knowledge, and Benett disputed some of the conclusions Sowerby reached based on her research. At the same time, Benett showed little regard for the work of Sowerby and mapmaker William Smith in identifying British strata.

When it came to fossils, the collection Benett assembled proved to be a valuable resource for her contemporary geologists and paleontologists. Anyone studying the region's rocks did well to visit her curiosity cabinet. It contained thousands of specimens from the Age of Reptiles, many of the fossils serving as type specimens for new species declarations. In a 1989 review of her collection, Arthur Bogen and Hugh Torrens observed that her collection had an impact on modern understanding of "Porifa, Coelenterata, Echinodermata, and molluscan classes Cephalopoda, Gastropoda, and Bivalvia."

In 1831, Benett published two versions of a catalog of her fossil collection: Catalogue of the Organic Remains of the County of Wiltshire. The catalogs were not entirely public. They were printed, probably in small runs, by a provincial printer with few credentials. They did not wind up in bookstores. Instead, they were distributed to Benett's geological colleages. Many paleontologists eventually forgot the catalogs, and Benett herself might have underestimated their value. But she filed copies with scientific institutions: the British Museum, the Woodwardian Museum, the Bristol Institution, even the Société Géologique in Paris. that enabled some of her names to become part of the scientific nomenclature. Collective amnesia about her catalogues led to some species-name priority disputes many years later.

The second catalog she published contained specimen illustrations, and she experimented with the relatively new technology of lithography as it was more economical than copper engravings.

In 1824, a contemporary of Benett's, Maria Graham, became the first female author in Transactions of the Geological Society, and she found herself in a public dispute with George Bellas Greenough, the Geological Society president. Benett's decision to publish a catalog that would only be distributed to a private network — and was shrewdly dedicated to Greenough when he was the society's vice president, — was in keeping with the time's expectations of female modesty. Historian Susan Pickford writes:

By controlling the diffusion of her works to a carefully restricted sphere, she was seen to respect the norms of female propriety and thus avoided becoming embroiled in an unseemly public dispute over the scientific legitimacy of her work, as Maria Graham had been.

Pickford contends that Benett had another disadvantage besides her gender: her location. Wiltshire was provincial, and it was challenging to contribute to geology from outside London. In fact, a relatively small group of London streets housed the leading geologists and leading scientific institutions.

Benett was known partly for her fossil collection and geologizing, and partly for her correspondence with contemporary fossil lovers, including William Smith and Gideon Mantell (whom she once corrected on the spelling of her name, reminding him of the extra D). Benett and Mantell occasionally swapped fossils, and when Benett died in 1845, Mantell penned her obituary for the London Geological Journal.

After Benett's death, her fossil collection was split up and scattered across multiple museums in the United Kingdom — London, Leeds, Bristol among others. Some of her fossils found their way to the St. Petersburg Museum. The bulk of her collection was purchased by an American, Thomas Bellerby Wilson, and he relayed the fossils to the Academy of Natural Sciences of Philadelphia.

Narrative text and graphic design © by Michon Scott - Updated May 27, 2019