The preface of the 1751 Encyclopedia of Diderot and d'Alembert states:

The general system of the sciences and the arts is a sort of labyrinth, a tortuous road which the intellect enters without quite knowing what direction to take. Impelled, first of all, by its needs and by those of the body to which it is united, the intelligence studies the first objects that present themselves to it. It delves as far as it can into the knowledge of these objects, soon meets difficulties that obstruct it, and whether through hope or even through despair of surmounting them, plunges on to a new route . . .

Denis Diderot and Jean d'Alembert were neither paleontologists nor biologists. They did not make any Earth-shattering discoveries about the history of life. But it can be argued that they fostered an environment in which Earth-shattering discoveries could be made. What Diderot and d'Alembert did was work with an army of experts and writers to publish an irreverent set of encyclopedias about science, art and trades in pre-Revolutionary France. 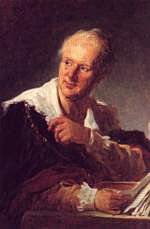 Diderot, from "Declaring an Open Season on the Wisdom of the Ages" by Robert Wernick 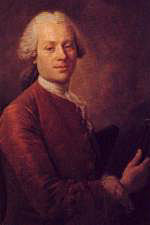 D'Alembert, from "Declaring an Open Season on the Wisdom of the Ages" by Robert Wernick

The encyclopedia started as a simple, shrewd venture: a translation of a successful English work by Ephraim Chambers. Diderot and d'Alembert initially joined the project as subordinates, then advanced to editors. Once in control, they expanded the project's scope to try to encompass all knowledge. No one could really succeed at that goal, but they probably came close.

Although their works had plenty of errors, the encyclopedists stressed observation over faith in traditional beliefs, and admitted quite openly that their new way of thinking was not new at all — they traced it back to Francis Bacon, Lord Chancellor of England. Despite their open acknowledgment of Bacon's influence, the encyclopedists soon came under attack, ostensibly for plagiarizing Bacon's work. The accusation came from a Jesuit journal. (The Jesuits' real concerns about the encyclopedias probably had little to do with Bacon and much to do with the fact that the fathers of the Society of Jesus hadn't been asked to author any theological articles in the reference books.) Not only did the encyclopedists overturn the notion that boy babies first emit the sound "A" (the root of masculinus) and girl babies first emit the sound "E" (the root of feminina), they also devoted as much attention to the manufacture of stockings as to the human soul. Grating on devout nerves, they paid less attention to God's aims regarding Noah's ark than they did to the superhuman effort that would have been required to shovel away all that manure. Needless to say, their books regularly came under fire. Diderot had to spend some time in jail in 1749, two years before the first edition's release.

The first volume came out in 1751, and the project continued for about three decades. In all, the encyclopedia consisted of 28 volumes and more than 70,000 articles authored by some 100 encyclopedists.

Though they both ranked among the sharpest intellects of the day, the encyclopedists' temperaments weren't perfectly matched. D'Alembert was the son of a well-born soldier and a nun-turned-socialite, who promptly abandoned her inconvenient son. Raised by a humble nurse and supported financially by his father, he soon showed remarkable mathematical talent — and a sunny temperament. Worn down by the constant controversy surrounding the Encyclopedia, however, the thin-skinned d'Alembert left the effort after the French government banned the work in the late 1750s. His departure caused a lasting break with Diderot.

The stunning conversationalist Diderot was a bit of a Bohemian, and the mathematician d'Alembert found some of his colleague's friends, such as Rousseau and Buffon, a little unpalatable. Diderot's early life held few indications of the free thinker he would later become. Born in a conservative town, with an older brother training for the priesthood, the boy had a period of religious fervor in his teens and considered the priesthood himself from time to time. But at 16, he moved to Paris, managed to live on a pittance, and started reading library books. Over time, his reading material became more unorthodox, and he supplemented his books with salon debates. He eventually became a visionary, predicting social and political changes that were indeed approaching pre-revolutionary France, and even foreseeing exponential increase in published books. 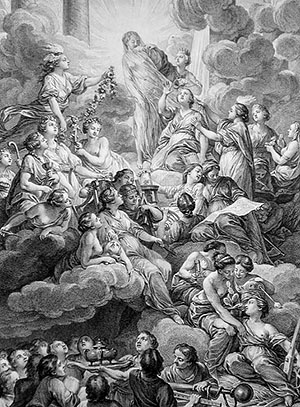 Encyclopédie frontispiece, from "A Dangerous Man in the Pantheon" by Philipp Blom

The ultimate freethinker, Diderot alternately flirted with deism, pantheism and atheism. Diderot's philosophy featured a mix of insights well ahead of their time — and nonsense. He was an early proponent of evolution, but unlike Darwin, he based his convictions more on thought experiments and readings than rigorous observation. Still, articles on fossils or "figured stones" almost certainly played a part in this thinking. Encyclopedia included articles on a fossil-rich German cavern, fossil shells, fossil bones, fossil mammoths, crystals and petrifactions. Influenced by the Roman poet Lucretius, Diderot concluded that organisms with organs well-suited to survival survived, and those with ill-suited organs simply did not. He disdained preformationism, realizing that reproduction was not a perfect process, that "mistakes" could occur in the process of reproduction and introduce new characteristics. He argued that environment could influence the traits of living things. Recognizing, along with Buffon, the overlapping characteristics between different species, Diderot believed that all species could be traced to a common ancestor. After initially rejecting spontaneous generation, he ultimately embraced the notion, again influenced by Lucretius. He believed that all matter was imbued with consciousness.

If d'Alembert was unhappy with Diderot's choice of friends, he must have been horrified at one of his old colleague's books. D'Alembert's Dream put the most heretical ideas in the mouths of d'Alembert, his mistress, and a few other luminaries Diderot knew. And d'Alembert's own dialogue included speculation on the future human form:

The original shape of a creature degenerates or perfects itself through necessity and habitual functioning. We walk so little, work so little but think so much that I wouldn't rule out that man might end by being nothing but a head.

This was more than silly. It was dangerous. The unpopular French monarchy tried to combat its own unpopularity by employing secret police on the lookout for any kind of subversion or even satire. Naturally d'Alembert wanted the book destroyed.

Given his succession of subversive books, and his written declaration that freedom would not come "until the last king is strangled with the guts of the last priest," you might expect Diderot to die in prison or at least disgrace. But when he died in 1784, he received a proper Catholic funeral attended by distinguished visitors, and some 20,000 spectators watched the procession. In the early 21st century, his bones remained in the ossuary under the altar in Saint-Roch, Paris. His bones also remained mingled with the bones of other 18th-century French free thinkers — a situation complicating the planned relocation of his remains to the Panthéon.

As for their collaboration on the encyclopedia, Diderot and d'Alembert lived and worked in a time when printed material was anything but fixed. Rather than faithfully adhering to the original text, publishers often changed the content depending on where they were published and for what audience. Diderot later felt disgust at some of the finished volumes.

Some have argued that in ushering in an era of free thought, the encyclopedists also ushered in the French Revolution, complete with its Reign of Terror and guillotine. Others have countered that they fostered freedom of the press and everyone's right to vote. Either way, their emphasis on facts advanced the cause of science.