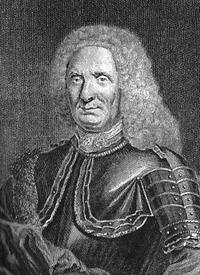 From Darwin's Ghosts by Rebecca Stott

In the early 18th century, a manuscript began circulating in France, one with heretical conclusions. Titled Telliamed, it relayed the conversation between a French missionary and an Indian sage, for whom the manuscript was named. Telliamed explained to the missionary (and narrator) that the Earth was some 2 billion years old, an age that could be deduced from gradually falling sea levels. Furthermore, life had arisen in the sea, and modern humans were the descendants of our marine counterparts.

In fact, there was no Telliamed. Benoît de Maillet, the manuscript's author, spelled his own name backwards in the title. If the book was heretical, and if he couldn't deny authorship, it was the Indian sage who was the heretic, not the him. If the book was a hit, there was his name hiding in plain sight.

De Maillet was a long-time employee of the king of France, and worked for many years in Cairo, overseeing French traders. Never popular with the people he oversaw, de Maillet eventually left Egypt for Italy and from there moved back to his homeland. But his time in Egypt exposed de Maillet to vestiges of the ancient civilization, a culture that still fascinates today. And when few people understood that the Earth long pre-dated any of the people living on it, ancient Egypt melded quite naturally into the origins of our planet.

De Maillet went on frequent sight-seeing trips through Egypt, and taught himself Arabic to better converse with the locals. He also read The Histories by Herodotus, and the Greek savant wrote of something that fascinated the Frenchman centuries later: Iron rings that had moored ships now sat in the desert. In other words, the Nile had silted up, creating land where there had once been sea. The determined Frenchman set out to find the ancient city of Memphis, whose ruins Herodotus had once observed. It wasn't an easy city to find in the 18th century, and when de Maillet and his men did locate it, the ruins were badly looted. But the iron rings were still there. De Maillet was not only convinced that sea levels had fallen in Egypt; he was sure they had fallen worldwide, and by calculating the rate of sea-level decline, he could calculate the age of the Earth.

A sea had once covered the globe, de Maillet concluded, not for 40 days in the Noachian flood, but for many years — a time span unimaginable in human terms. That sea had retreated through a slow process of evaporation, and water levels were still dropping.

Few people had made such audacious suggestions about the age of the Earth by the early 1700s, and de Maillet had to tread carefully, hence the pseudonym. Furthermore, he felt the need to build a strong case — at least a case he felt was strong. He gathered evidence for Telliamed for years, first in Egypt, then in Italy, then in France. One piece of evidence was a hollow log that ditch-diggers found in Italy, filled with seashells, pinecones, and bones and teeth of animals. De Maillet interpreted it as the pump from a ship that had once sailed on a sea long retreated. (It was more likely a fossil log.) But more incredible than the ship pump were the sea people. Yes, sea people.

By the time he sought a publisher for his book, de Maillet had collected a motley assortment of sea-people sightings: a sea girl in Holland in 1430, a half-human sea monster in Martinique in 1671, a sea man in Sestri in 1682, another sea man off Newfoundland in 1720. These sea people shared some characteristics: an absence of speech, and a nostalgia for their watery home. All of them died soon after capture by landlubbers. The sea people had descended from earlier life forms in the sea, where the earliest life was microscopic. And modern humans had descended from sea people.

De Maillet continued working on the book until about a month before he died. Ten years after his death, Telliamed was finally printed, in 1748. By the time the book was ushered through the printing process, the manuscript had circulated for years, and the author's identity wasn't much of a secret.

Scientific advances since de Maillet's time have confirmed that the Earth is billions of years old, about 4.6 billion, in fact, and that we have evolved from earlier life forms, and far enough back in our family tree, our ancestors did live in the ocean. But these findings have been based on physical evidence: radiometric dating of rock layers, examination of fossils, and studies of genetic material shared by all living things. De Maillet, despite his reputable sources for sea-people sightings, didn't do the same caliber of research.