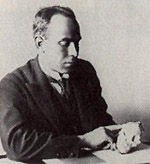 From Bones of Contention by Roger Lewin © Barlow/Rand

In 1923, 29-year-old neuroanatomist Raymond Dart uprooted himself from University College, London, for a new post he didn't entirely want: professor of anatomy at the University of Witwatersrand in Johannesburg. The anatomist Sir Arthur Keith, who urged the younger scientist to apply for the position, later wrote:

I was the one who recommended him for the post, but I did so, I am now free to confess, with a certain degree of trepidation. Of his knowledge, his power of intellect, and of imagination there could be no question; what rather frightened me was his flightiness, his scorn for accepted opinion, the unorthodoxy of his outlook.

Born in the middle of a historic flood in Brisbane, Australia, the unorthodox young man had seen no shortage of orthodoxy growing up; his parents were fundamentalist Christians, and he shared their biblical literalism until he got to college and studied zoology and geology. He was thrilled to work at University College — considered the world's center of medicine — and felt he was walking away from all the action. In fact, he didn't how lucky he was, and his luck became apparent in the fall of 1924.

Dart had offered modest cash prizes to students who brought him bones that would be useful in teaching his classes. One student, Josephine Salomons, had brought him a fossil baboon skull, and he was so impressed, he asked for any other fossils found in the same quarry. He received another delivery of fossils from that quarry one Saturday afternoon as he dressed for a wedding reception to be held at his house. He recounted years later:

On the very top of the rock heap was what was undoubtedly an endocranial cast or mold of the interior of the skull. Had it been only the fossilised brain cast of any species of ape it would have ranked as a great discovery, for such a thing had never before been reported. But I knew at a glance that what lay in my hands was no ordinary anthropoidal brain. Here in lime-consolidated sand was the replica of a brain three times as large as that of a baboon and considerably bigger than that of an adult chimpanzee.

Dart rummaged through the box to find the face that fit the brain. He was successful, but by then the anxious groom was threatening to find another best man. Dart set the fossil aside to attend to the wedding, but he spent the next several weeks chipping matrix away from the face with his wife's sharpened knitting needles. When he finally removed the rock, he saw the face of an apelike child, the Taung Child.

Rather than dutifully sending the fossil off to an expert in England, the enthusiastic young Dart described the fossil himself. Within weeks, he submitted a manuscript to Nature Magazine, writing: 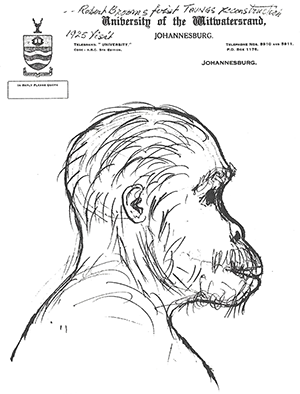 Dart's sketch of the Taung Child made during a meeting with Robert Broom, from Seven Skeletons by Lydia Pyne (top). Diagrams from "Australopithecus africanus: The Man-Ape of South Africa" by Raymond Dart in Nature (bottom)

Apart from [its] evidential completeness, the specimen is of importance because it exhibits an extinct race of apes intermediate between living anthropoids and man. . . . [T]heir eyes saw, their ears heard, and their hands handled objects with greater meaning and to fuller purpose than the corresponding organs in recent apes. They had laid down the foundations of that discriminative knowledge of the appearance, feeling and sounds of things that was a necessary milestone in the acquisition of articulate speech. . . . Unlike Pithecanthropus, it does not represent an ape-like man . . . It is therefore logically regarded as a man-like ape. . . . I propose tentatively Australopithecus africanus, in commemoration, first, of the extreme southern and unexpected horizon of its discovery, and secondly, of the continent in which so many new and important discoveries connected with the early history of man have recently been made, thus vindicating the Darwinian claim that Africa would prove to be the cradle of mankind.

Nature published Dart's description on February 7, 1925. He expected that acceptance of his findings would be slow, but even he was amazed at the force of the objections. Some of the foremost paleoanthropologists of his day criticized Dart for mistaking a simple ape for a member of the human family tree. Keith, who had encouraged the younger scientist to move to Johannesburg, called the find "preposterous."

Why the objections? At least one was legitimate. Juvenile apes, like the fossil Dart described, look more humanlike than adult apes. This led some to believe that Dart saw an affinity that wasn't really there. And before the age of reliable dating techniques, some thought the fossil was only 500,000 years old, far too young to be a human ancestor. And other anatomists were more interested in measurements and casts than Dart's musings on "discriminative knowledge."

Other criticisms were less valid. Despite Darwin's suggestion that humans arose in Africa, it was commonly believed for much of the 20th century that the birthplace of man was Asia. Dart's find was on the wrong continent. What's more, although prominent scientists of the time accepted the idea of evolution, they were convinced that there had always been a great gulf between humans and the rest of the animal kingdom. This creature of Dart's was just too apelike. Even Dart's nomenclature was criticized. An unsigned editorial in Nature complained about his mixing of Latin and Greek roots, commenting, "the niceties of etymology do not generally appeal to him." Most ironic of all, however, was that Dart's find conflicted with what was "known" from the Piltdown skull. (The skull was still widely considered a legitimate find at the time; Dart himself referred to Eoanthropus dawsoni in his paper.) When paleoanthropologists started paying serious attention to legitimate human fossils, their attention focused on Davidson Black's Peking Man, announced in 1929. 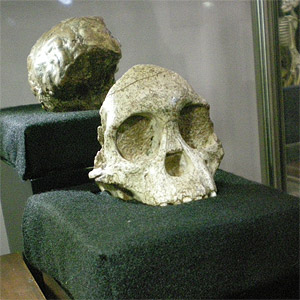 The Taung Child fossil at the University of the Witwatersrand, Johannesburg. Photo by Michon Scott.

So the years after the Taung Child discovery were difficult ones for Dart, in which his first marriage collapsed. He had an ally in Robert Broom, feisty doctor with an interest in paleontology. When Dart was completely demoralized by the criticism, Broom took over, and in 1936 found the first adult australopithecine skull. Unfortunately, Broom didn't have the influence to sway academic opinion, in part because of his own tendency to challenge authority. Just as unfortunate was that the ambiguity of who had the authority to excavate where led to occasional friction between Broom and Dart.

Dart remarried, and his second marriage was happier (or at least longer lasting) than his first, but it wasn't trouble free. His second wife gave birth to a daughter in 1940 and a son in 1941, but the son was premature, born at six and a half months. At birth, he weighed just over two pounds. The boy spent weeks in an incubator, and developed cerebral palsy. In 1943, Dart suffered a nervous breakdown, and though he attributed the episode to overwork associated with World War II, there was some speculation that anguish over his son's condition was the real problem. But Dart eventually returned to work and got on with his life.

Although ahead of his time in many ways, Dart was a product of his time in others. He felt the Khoisan people of South Africa had a childlike appearance and therefore assumed they must also have childlike behavior. When a colleague, Gertrude Caton-Thompson, argued at a 1929 conference for the British Association for the Advancement of Science that elegant stone towers at Great Zimbabwe were the work of native Africans, not white Europeans, Dart angrily stormed out of the room, having never actually visited Great Zimbabwe himself. Science historian Robin Derricourt observes that Dart was weighing in on a topic outside his area of expertise, but he may have shared the view common among European settlers and their descendants: Indigenous Africans were uncivilized, so anything impressive had to be attributable to someone else. That doesn't mean Dart was a straight-up racist; he opened Wits Medical School to non-whites, and spoke out against discrimination. Dart's protégé Phillip Tobias also took a stand against apartheid.

Like many others in the field of human origins, Dart believed that apes stood up and smartened up when African savannas opened up, and "Man-Apes" had to contend with predators such as saber-toothed cats. Although paleontologists have revisited the role of savannas in human origins, too many fossil finds — Ardipithecus ramidus, Sahelanthropus tchadensis, Orrorin tugenensis, for example — strongly suggest that hominids were walking upright in forested environments sometime between 4 million and 7 million years ago.

Dart had his gaffes as well. In the 1950s, he developed a idea about australopithecine culture that he called osteo-donto-keratic (meaning bone-tooth-horn) theory. He believed that human culture revolved around acquiring these symbols of strength from the animal kingdom, then using them against the animals and perhaps each other. He projected specific uses onto individual fossils: toothy daggers, long-bone clubs and skull drinking cups. He speculated about cannibalism, too. He concluded that humans were inherently aggressive (maybe not such an unreasonable assumption given his work as a medical orderly during World War I). Although ODK theory attracted some admirers (Stanley Kubrick among them, as evidenced by 2001: A Space Odyssey), it has been largely discredited by paleoanthropologists. In The Science of Human Evolution, John Langdon remarks that one of Dart's mistakes in the Killer Ape theory was to underestimate what the weight of soil alone could do to an empty hominid skull. While a sediment-filled skull might survive, an empty skull could look as if it had been crushed by a violent blow.

Another South African scientist, Bob Brain, devoted years to painstaking research of which body parts get eaten by modern predators. Brain's research debunked Dart's claim that australopithecines routinely removed each other's heads by showing a more prosaic likelihood: Predators eat the body parts that are easy to chew. Skulls are generally hard to chew and therefore frequently get left behind.

Some of Dart's fondness for the Killer Ape theory might have been plain old showmanship. Knowing it would "get 'em talking," he opined:

Man's predecessors differed from living apes in being confirmed killers: carnivorous creatures that seized living quarries by violence, battered them to death, tore them limb from limb, slaking their ravenous thirst with the hot blood of victims and greedily devouring livid writhing flesh.

Dart's aim with the purple prose may not have been racist, but the outcome could be. When he characterized australopithecines as fond of decaptiation in a 1953 article, his editor prefaced the article by noting that "of course they [the australopithecines] were only the ancestors of the modern Bushman and Negro and of nobody else."