In a 1794 faculty meeting at the natural history museum in Paris, Jean-Baptiste Lamarck chose not to recommend a talented young comparative anatomist for a newly opened position because the post called primarily for an artist, and everyone knew Georges Cuvier was really a first-rate scientist. Lamarck expressed his regret about the mismatch because he had heard that the hard-working young man was "of a very gentle and social character." Cuvier eventually found a spot at the museum, and Lamarck eventually learned how wrong he was. Cuvier's disdain followed the older scientist into his grave. After Lamarck died, poor and blind, Cuvier wrote him a eulogy so awful no one would publish it. 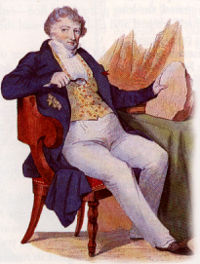 From Fossils: Evidence of Vanished Worlds by Yvette Gayrard-Valy

Cuvier is remembered as a catastrophist, a racist, and an egomaniac who used his reputation to intimidate others, in particular the hapless Lamarck. All these descriptions fit, but they're only part of the story.

Cuvier lived from 1769 to 1832 and during his lifetime, he changed science as few others have. Geology, paleontology and comparative anatomy were budding fields in Cuvier's day, and he gave them credibility by insisting upon factual evidence, not only for his own theories but also for those of his colleagues. When others expected to find mastodons and giant beavers in western North America, Cuvier accurately pointed out that many species had forever vanished from the face of the Earth. At a time when others were attributing dinosaur femurs to giants, he could identify fossil marsupials from their teeth and pelvic bones. "If an animal's teeth are such as they must be in order for it to nourish itself with flesh," he remarked, "we can be sure without further examination that the whole system of its digestive organs is appropriate for that kind of food."

One popular story about Cuvier was that one of his students, perhaps fortified with liquid courage, burst into his private quarters one evening dressed in hooves and horns proclaiming to be the devil there to eat the young naturalist alive. Cuvier reputedly responded, "All creatures with horns and hooves are herbivores, so you can't eat me." 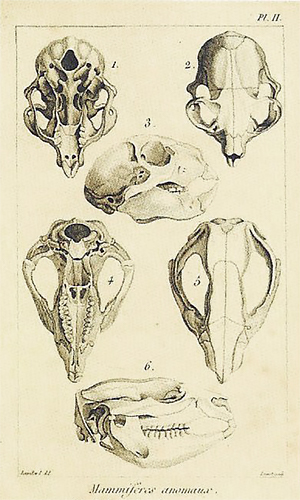 One of Cuvier's comparisons of mammal skulls. From Scientifica Historica by Brian Clegg.

Cuvier's skill in understanding form and function enabled him to establish categories for animal life, or "embranchements": vertebrates, arthropods, mollusks, and "radiata" (today classified as cnidarian and echinoderm phyla). He even fleshed out (on paper, at least) fossil mammals in lively poses, but shied away from publishing these reconstructions, perhaps fearing accusations of wild speculation.

Cuvier was born in the French-German duchy of Württemberg. His mother encouraged him to study hard, and natural history became his passion. As a young man, he served as a private tutor for a noble family in Normandy and watched the French Revolution from afar. Initially, he had high hopes for the Revolution's aims, but bloodlust of the Terror sickened him. Despite his growing distaste for the new regime in revolutionary France, he managed to overcome his scruples and accept a post with the new administration. As a result, his career took off. By the time of his death, he had accepted noble titles from Napoleon, Louis XVIII, Charles X and Louis-Philippe. As religious faith fell in and out of favor, he not only survived but thrived, never pushing his scientific speculations enough to offend the wrong people. Cuvier mastered the art of politicking very well, and his rivals had much to fear.

If Cuvier's treatment of intellectual rivals (if he actually believed he had any) is unsettling, his views on race are cringe-inducing. While some of his contemporaries, such as Erasmus Darwin and Joseph Wedgwood, deplored slavery, Cuvier described native Africans as "the most degraded of human races, whose form approaches that of the beast and whose intelligence is nowhere great enough to arrive at regular government." He elaborated:

The Negro race is confined to the south of the atlas. Its complexion is black, its hair frizzy, its cranium compressed, and its nose crushed; its prominent muzzle and its large lips obviously bring it closer to the apes: the tribes that compose it have always remained barbarous.

When advising naturalists traveling to Australia on the best method for obtaining human skeletons for later study, he casually suggested boiling cadavers in solutions of sulfur or potash to take the flesh off the bones.

Cuvier apparently didn't care to tag along to Australia. He made his greatest discoveries in his laboratory, examining natural history specimens. He enjoyed the advantage of rifling through Napoleon's booty from other countries, assembling what was, at that time, probably the best museum collection anywhere. In addition, he cultivated a huge network of associates and informants who provided him with material. Much of what reached Cuvier consisted of "proxies" — illustrations of specimens. Even then, he reached remarkable conclusions.

He identified a pterosaur fossil, originally described by Cosimo Allesandro Collini in 1784, as a flying reptile. Cuvier first heard about the fossil in 1800 from a friend, Jean Hermann, who sent his own interpretive drawing. Hermann guessed correctly about the creature's long finger supporting a wing membrane, but drew a batlike creature complete with mammalian naughty bits. Other naturalists sent their own, different, drawings. Based on these illustrations, Cuvier managed to arrive at the correct interpretation, calling the animal a ptéro-dactyle. Cuvier appreciated how his interpretation might defy reason, writing:

Of all the organisms whose ancient existence is revealed in this book, these are incontestably the most extraordinary, and if we saw them alive, would seem the strangest as compared to all living beings. . . . [it] would seem, to those who have not followed this entire discussion, the product of a sick imagination rather than the ordinary forces of nature.

Dueling sketches of a pterodactyl by Jean Hermann (left) and Michael Oppel (right). From "Close Kin of the First Flying Vertebrates Identified" by Kevin Padian in Nature.

Cuvier also identified the giant fossil found at Maastricht as a marine lizard (another spot-on identification). He lacked the ability he was rumored to have, to reconstruct an entire animal from a single bone, but he did say he could pinpoint what type of animal it was from such scant evidence. With so many advantages at home, Cuvier saw little reason to travel, and even refused an opportunity to visit Egypt. In fact, he didn't think much of those who spent a lot of time in the field, calling their observations "broken and fleeting."

Cuvier's combination of uncanny ability to identify animals from sketches, and reluctance to travel produced mixed results. When it came to identifying and reconstructing the extinct giant ground sloth, Megatherium, Cuvier far surpassed the job of Juan Bautista Bru, who was working with the actual fossil bones in Madrid. But when he published about the find, Cuvier wrote about the animal found in Paraguay. The fossil had been found in Argentina. Same difference to Cuvier, apparently. 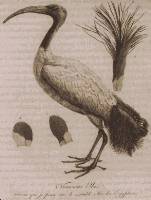 Cuvier's life and work preceded what were arguably the most popular (the naming of dinosaurs by Sir Richard Owen) and important (the theory of natural selection proposed by Charles Darwin and Alfred Russel Wallace) events in paleontology. Modern geology is based largely on the principle of gradualism or uniformitarianism, a school of thought maintaining that the present-day Earth has been shaped slowly by everyday forces of erosion and deposition. Because Cuvier believed that the Earth had been beset by a series of catastrophes. Had Cuvier lived a generation later, his views might have been different, but he died convinced of the fixity of species. In Cuvier's time, the only explanation offered for evolution was by Lamarck, and Lamarck believed that species could pass on to their offspring characteristics that they had acquired during their lives.

Although he turned down the opportunity to travel to Egypt, Cuvier used Egyptian finds to his benefit. He compared mummified ibises found in Egypt with those still living to maintain that species do not change, and he confidently proclaimed that there were no human fossils. On the other hand, he recognized a common skeletal plan for all vertebrates.

Cuvier was able to study Egyptian skeletons thanks partly to the efforts of his longtime colleague Geoffroy Saint-Hilaire, who took up Napoleon's offer to see Africa. Friends at first, Cuvier and Geoffroy Saint-Hilaire eventually became fierce adversaries. Geoffroy Saint-Hilaire critiqued Cuvier's analysis of fossil crocodiles (clearly not his best work) and, worse, argued for the relationship between what Cuvier regarded as unrelated embranchements. Although their scientific differences grew intense, hostilities halted briefly when Geoffroy Saint-Hilaire's daughter died. Knowing from experience what it was like to lose a child, Cuvier grieved with his old friend. But the public disputes resumed soon afterwards.

Contrary to what some people might assume, Cuvier was no biblical literalist. He apparently believed that the Bible could be relied upon as a historical account only for events with human witnesses. He also rejected a literal reading of the Bible in terms of time and observed that even youngest sediments were "thousands of centuries old." He asserted (accurately) that life in the sea had preceded life on land, and reptiles had preceded mammals. This stance was a marked change from the view he held early in his career. For a long time, Cuvier — like almost everyone else — divided Earth's history into just two periods: the current world and "the former world." Savants took a while to realize that "the former world" had actually consisted of a series of geologic ages, each with its own characteristic landscapes and organisms.

Cuvier's agreement was often all that was needed for a scientist to make a bold claim — a claim that usually proved correct. Encouraged by Cuvier, William Buckland identified the first fossil mammal from the Age of Reptiles, and Gideon Mantell identified Iguanodon as an herbivorous reptile. Fossil collector Mary Anning had worse luck, at least initially. When Cuvier saw the first sketches of the plesiosaur she found, he suspected the long-necked "monstrous" animal was a composite. It took the assurances of Buckland and William Conybeare to persuade him otherwise. It was Cuvier who identified a perplexing pachyderm tooth from the Hudson River Valley as that of a mastodon, differentiating that animal from the mammoths dug up elsewhere in America and in Siberia.

The years weren't entirely kind to Cuvier. When the ornithologist and artist Audubon met Cuvier, he described him as, "size corpulent, about five feet five, English measure; head large; face wrinkled and brownish; eyes gray, brilliant and sparkling; nose aquiline, large and red; mouth large, with good lips; teeth few, blunted by age, excepting one on the lower jaw, measuring nearly three-quarters of an inch square." (Audubon's own teeth wouldn't fare much better with age.) Cuvier died of cholera in his early 60s.

In the century after Cuvier's death, Charles Lyell's uniformitarianism and Darwin's natural selection both gained widespread acceptance. Cuvier's catastrophism drew the derision of many 20th-century scientists. But as more evidence about past environments has accumulated, modern geologists have realized that, although Cuvier's catastrophism wasn't right, it wasn't entirely wrong, either. The asteroid impact theory of dinosaur extinction has vindicated him rather well. So has the rapid radiation of new species after that extinction. Commenting on a paper about the evolution of bird species, Bhart-Anjan Bhullar remarks that "evolution is highly contingent on chance occurrences, marrying a Darwinian and Cuvierian world view."

Though he was not the first to think about it, Cuvier persuaded the scientific community to accept the theory of extinction, a notion that was in its own way as controversial as evolution. Despite his prejudices and his ego, Cuvier was one of history's sharpest.