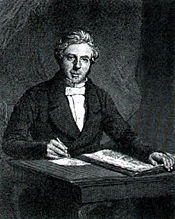 From Victorian Sensation by James A. Secord

In 1844, an unknown author attempted to make the subject of evolution respectable to Victorian society. Though the author's work charmed many (Prince Albert was said to read it aloud to Queen Victoria), it outraged many more. The book was so controversial because it dealt with a taboo subject and rejected the testimony of Genesis. Equally important, the book was eloquently written to appeal to the general public. (Darwin's Origin of Species arguably caused less of a stir.) Writing a book for the elite was one thing — affluent gentleman could be trusted to think critically. But this book might sway the unstable minds of lower class men and — worse — women, thus jeopardizing their souls.

The book was titled Vestiges of the Natural History of Creation, and while one review called it a "small and unpretending volume" with "so many great results of knowledge and reflection," other reviews were less friendly. Geologist Adam Sedgwick wrote:

I cannot but think the work is from a woman's pen. . . . [It] leaps to a conclusion, as if the toilsome way up the hill of Truth were to be passed over with the light skip of an opera-dancer. This mistake was woman's from the first. She longed for the fruit of the tree of knowledge, and she must pluck it, right or wrong.

In fact, Sedgwick was wrong. Although early speculation pointed at Ada Lovelace as the author, Robert Chambers was the real culprit.

Thanks to his father's inability to manage money (or stay sober), Chambers did not have an easy youth. He and his brother William were both born with 12 fingers and toes. Both boys had corrective surgery, and William's went well. Robert's, however, left him lame. Growing up in a rough Scottish market town named Peebles, he turned to books, renting them from a small library. He and his brother learned to read the same book simultaneously. One of Robert's greatest childhood delights was discovering a set of Encyclopedia Britannica in the family attic. His dad had bought the set on a whim and, about a year after Robert found it, gave it up just as capriciously in order to pay off debts. But Robert's strong-willed mother made sure her boys got a classical education. The brothers eventually started a publishing business, though they did not actually publish Vestiges.

Both brothers congratulated themselves on being self-made men, and they took a then-radical approach to publishing. Up to that time, had publishers generally concentrated on small, wealthy, well-educated audiences, and produced fairly expensive books for their readers. The Chambers brothers instead aimed for wide audiences with less education (or cash) but a burning desire to learn. A conservative Tory in his youth, Chambers eventually became a liberal Whig and a deist, and political reform permeated his publishing work. Not only were most books too expensive for working-class men, he observed, but those same men could rarely gain admission to universities, museums or libraries.

The Chambers brothers took advantage of the latest developments in printing and transportation technology to reach their target audience, sometimes operating multiple publishing houses at once. But the bustle and noise of the business drove Chambers, along with his family, to the countryside two years before his notorious book was published.

Chambers had little scientific training, so his book contained plenty of errors. Although some were corrected in later editions, his publisher was dismayed to learn that Chambers didn't have the knowledge to make many corrections himself; he had to rely on others for help. Despite this need for collaboration, Chambers managed to keep his authorship a fairly good secret, only letting a few subject-matter experts in on his secret. Throughout his life, he never publicly acknowledged his role in Vestiges. When one good friend asked about his insistence on secrecy, he reputedly pointed to his house, containing his wife and 11 children and replied, "I have 11 reasons." Published after his death, the 12th edition of the book, published in 1884, bore his name on the title page, cover and spine.

It seems unbelievable today, but anonymous authorship of scientific publications was not uncommon in the 19th century and, in the case of Vestiges, it didn't hamper the book's commercial success. It may have even helped the sales as readers might try to identify the author based on the content and writing style. Anonymous authorship carried another benefit: Because the real writer might be a powerful aristocrat, reviewers exercised a little more restraint in criticizing the book. In the case of Vestiges, though, the newly formed YMCA organized a series of lectures to protect the tender young minds from the book's implications.

Charles Darwin had a pretty good idea that Chambers was the author of Vestiges, though he referred to the anonymous author of the book in an introduction to later edition of Origin. Darwin pointed out deficiencies in Chambers's book but went on to praise it:

[T]he work, from its powerful and brilliant style, though displaying in the earlier editions little accurate knowledge and a great want of scientific caution, immediately had a very wide circulation. In my opinion it has done excellent service in this country in calling attention to the subject, in removing prejudice, and in thus preparing the ground for the reception of analogous views.