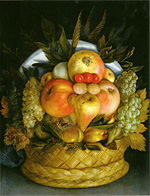 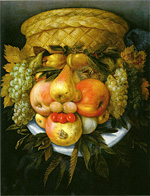 Look at a picture one way and it's a bulging basket of fruit. Rotate the picture 180 degrees, and it's a face. Making the picture make sense from both perspectives is only one accomplishment of Renaissance artist Giuseppe Arcimboldo. Composed of fruits, vegetables, animals, books, papers, platters, roasted meats, even the ingredients for his favorite minestrone soup, his portraits also incorporate layers of symbolism — astrological, imperial and spiritual — that may be lost to a modern viewer.

Rediscovered in the 1930s and credited with inspiring surrealism, his work has been exhibited at the Museum of Modern Art in New York. Enjoyed by high- and lowbrow art (and food) lovers, his pictures have even inspired an Arcimboldo restaurant in the Asterix Theme Park in France. But Arcimboldo didn't simply paint generic flowers and animals that conveniently suited his purposes. His paintings show remarkable attention to detail in depictions of very real flora and fauna. His painting entitled "Spring," for instance, contains 80 identifiable flowering plants.

Arcimboldo was born in Milan around 1526. He died in the same city in 1593, but he did not pass his entire life in northern Italy. Most of the pictures he painted that still garner attention today were painted in Central Europe, in the Hapsburg court. After designing stained-glass windows, tapestries and frescoes in Lombardy, perhaps taking some inspiration from the works of Leonardo da Vinci, Arcimboldo went to work for the Holy Roman Empire, probably in 1562. 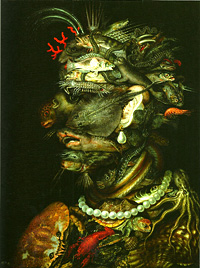 He joined the Hapsburg court while Ferdinand I was emperor, although Arcimboldo was probably never in the direct employment of Ferdinand. Instead, he worked for Ferdinand's son Maximilian II and, later on, Rudolf II. At first, he painted portraits and portrait replicas, and organized festivals, taking care to sufficiently flatter his patrons. Later on, he began painting composite portraits that are still admired today. In return, besides a salary and access to outstanding collections, he enjoyed benefits such as Maximilian II "legitimizing" his (Arcimboldo's) son Benedict. A handy favor.

How Arcimboldo happened upon the idea of portraits composed of things other than the person portrayed isn't known, but composite heads date back to Greco-Roman times. In the Hapsburg court, he also had access to ancient jewelry — carved gemstones and cameos — combining human and animal characteristics. Da Vinci's "grotesques" might also have provided some inspiration.

The composite heads Arcimboldo painted for the Hapsburgs might be interpreted as jokes, and it helped that the Hapsburgs had a sense of humor. (Arcimboldo vacated Milan about the same time a grouchy archbishop there went after artists whose style offended his holiness.) But even if a sense of humor in the subject helped, the portraits were almost certainly intended to compliment his patrons. Anything else would have been foolhardy. Rudolf II counted among his favorite paintings Arcimboldo's "Four Seasons" and the "Four Elements" (earth, air, water and fire). Water appears on this page, combining some 60 aquatic and marine species. And the most famous portrait ever painted of Rudolf was Arcimboldo's rendering of the emperor as Vertumnus, the Roman god of the seasons.

The layers of meaning in the Vertumnus picture (visible in the biography of Rudolf II) nearly boggle the mind. The picture not only resembles the emperor — although probably in a younger, trimmer, handsomer form — but also includes the flora of the seasons with realistic detail. Beyond that, the portrait matches a poem penned by Arcimboldo about the subject, which closely follows a poem by the Roman poet Propertius. And, from top to bottom, fruits and vegetables appear in the picture in the same order they are mentioned by Propertius. 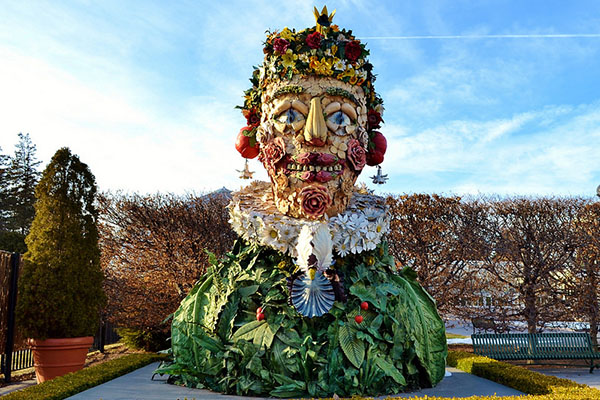 Arcimboldo's trick of painting pictures that look like portraits from one angle and simply baskets or bowls of food from another relies partly on everyone's aptitude for spotting faces. The human brain registers faces quickly and effortlessly — when the faces are right side up. Inverted faces are much tougher to recognize. Research published in 2012 indicated that infants as young as seven months could recognize composite portraits by Arcimboldo, so long as the portraits were upright, and the facial views were frontal rather than profile. (Alas, slightly younger babies, five to six months old, showed little indication of perceiving faces in the flora and fauna.)

Arcimboldo likely spent years working on the invertible pictures he painted, and the Vertumnus portrait was actually painted in Milan after he retired there several years before his death. Although back in his hometown, the artist remained in the employ of Rudolf, and continued to send him completed works. Looking at Vertumnus, one can see why the emperor was reluctant to let the artist go. 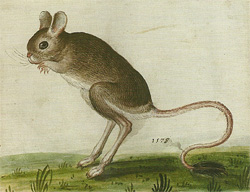 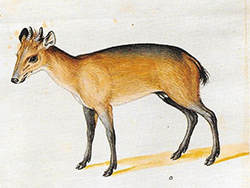 Illustrations attributed to Arcimboldo: Jerboa from Arcimboldo by Thomas DaCosta Kaufmann (top), and duiker from Eye for Detail by Florike Egmond (bottom)

Not every painting of Arcimboldo's flattered its subject. The most obvious case was a picture that probably depicted Johann Ulrich Zasius, the vice-chancellor of Maximilian II. Zasius earned a reputation of being two-faced in his dealings with the emperor, plus he'd been disfigured by the pox. Not a childhood disease sort of pox. The French pox. Arcimboldo gave the subject of "The Jurist" a body of books and papers and a face of roasted meats, with a dead frog for a nose. It was not a flattering picture, but Zasius wasn't the intended audience. Maximilian was. At the Hapsburg court, Arcimboldo's political talent likely matched his artistic abilities. His self portraits show a man haunted by melancholy. Maybe he was, but melancholy was the characteristic expected of a great artist, so perhaps he simply made sure he showed it.

Arcimboldo's work impressed not only in the realm of art and politics, but also in the realm of natural history. Besides composite portraits, he painted nature studies of plants and animals (such as the jerboa, shown here), likely using them as reference points for his later works. Arcimboldo's contemporaries admired his work so much that he was dispatched to Germany in 1582 to collect specimens from the New World, along with antiquities. Many of his paintings found their way into the collections of eminent naturalist Ulisse Aldrovandi.

Arcimboldo's work exhibits a thorough knowledge of natural specimens, not just those from Europe, but also from Africa, Asia, Australia, the Americas, even New Guinea. He portrayed flowers, fruits, birds, fish and terrestrial animals with equal care. The distinctions we maintain today between art, nature, science and whimsy weren't firmly in place in Arcimboldo's time, but the art and science worlds are luckier for it.