From Possessing Nature by Paula Findlen

When Pope Gregory XIII assumed his new exalted post in 1572, a "fearsome" dragon appeared in the countryside in Bologna. It was a worrisome event, but one could say the new pontiff was well prepared. He assumed the papal throne equipped with a cousin who specialized in dragons. Ulisse Aldrovandi inspected the dragon's alleged carcass and (remarkably) called it a good omen for the new pontiff. A lifelong dragon aficionado, he kept in his collections the remains of another, diminutive dragon, only a little larger than a human hand. It is still on display today, in the Biblioteca Universitaria di Bologna.

Aldrovandi was a true Renaissance man, living between the lifetimes of da Vinci and Galileo, and rooted in both classical and religious sensibilities. Considering himself a latter-day Aristotle, Aldrovandi was named after one of the two protagonists of The Iliad and The Odyssey. (His brother was named Achille after the other protagonist.)

At the age of just 12, Aldrovandi visited Rome on his own. He moved to the city again at the age of 16 before returning to Bologna and then traveling through Spain and France for months. As a young man, Aldrovandi studied law, philosophy, logic and mathematics at the universities of Bologna and Padua. He completed his degree in medicine and philosophy in 1553, and began teaching logic the following year. By then, however, he had developed a strong interest in natural history, and eventually turned to teaching that subject. From a monetary perspective, it was a bad move; he would have commanded a much higher salary by sticking with medicine. The naturalist likely hoped for his cousin's papal patronage, but the pontiff's financial support was sporadic (Aldrovandi was sometimes suspected of heresy), and despite his outstanding reputation, he often had to seek patronage elsewhere. Fortunately, Aldrovandi wasn't motivated by money so much as a desire to establish natural history as a legitimate field of study. In this he was a dazzling success. 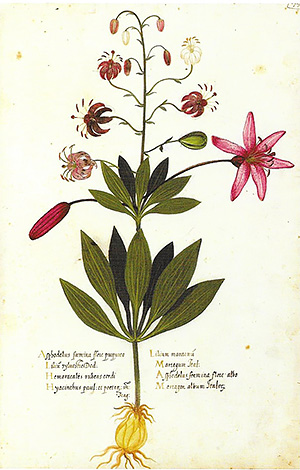 One of Aldrovandi's "perfect plant" illustrations showing different color varieties and life stages, from Eye for Detail by Florike Egmond

Aldrovandi established one of the most acclaimed curiosity cabinets in European history, containing more than 18,000 specimens, according to his written description from 1595. A friend once wrote him, "[Signor Contestabile] told me that he had seen so many and various things in your studio that he remained stupefied. One can believe that there is no studio similar in all of Europe." Ever aware of his own achievements, Aldrovandi once described a young friend's new garden as, "planted with so many exotic plants, which I at one time or another have seen, had, described, and depicted." Even better, he had inscribed beneath his portrait, "This is not you, Aristotle, but an image of Ulysses: though the faces are dissimilar, nonetheless the genius is the same." He vowed to write only about things he had personally witnessed or examined (and chided Aristotle for passing along unverified information), but didn't always live up to his own pledge. (In his book Musaeum Metallicum, he passed along an account of men graving their sheep in Tartary who inexplicably turned to stone; he even included a picture. He devoted an entire book to monsters, through in fairness, the term "monster" was defined more broadly than it is today.) And when he Aldrovandi did examine specimens, his own eyeballs sometimes deceived him. Inspecting a bee drone, he popped it open to find a tiny, perfectly formed ox head. (Bees were believed to generate spontaneously from ox carcass rot.) The witnesses Aldrovandi summoned to his bee investigations also, conveniently, saw what the esteemed naturalist saw.

Fortunately, many of the geologic specimens he did examine — and depict in his books — are still preserved in modern collections. Some 200 specimens are housed in the Museum Aldrovandi in Palazzo Poggi, although they constitute only a tiny fraction of what he recorded having in his collections during his lifetime. Counted among the prized possessions in his collection were pictures of plants and animals. Though they weren't always accurate, they served as substitutions for the real things.

How fossils formed puzzled naturalists during Aldrovandi's life and long after his death. He rejected the Noachian flood as an explanation for the formation of fossils, but he believed that some fossils formed in situ, making him partially right and partially wrong in understanding fossilization. Although he misinterpreted many body fossils (noting their lack of preserved internal structure to conclude they hadn't been animals), he did correctly interpret some trace fossils, for instance, the rocky remains of ancient bivalve burrows. He also identified some plant fossils.

Aldrovandi reputedly began his natural history museum on a trip to Rome in 1549, having been summoned there to face trial for heresy. With half a dozen other Bolognese men, he awaited his doom only to be granted amnesty by incoming Pope Julius III. According to some accounts, he insisted a trial still be held just so he could prove his innocence. Whatever the case, while most of his cellmates immediately headed home to Bologna, Aldrovandi lingered in Rome, ogled antiquities, and befriended fish enthusiast Rondelet, who put him in the habit of collecting and studying his own piscine specimens. 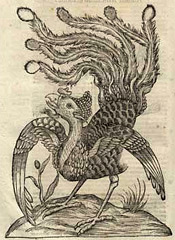 From "Italy, the Cradle of Ichnology" by Andrea Baucon in Studi Trentini - Acta Geologica

Of the visitors to Aldrovandi's museum, only the cream of the crop were asked to sign his "book of friends," yet over the years he collected more than 1,500 signatures. Relying mostly on objects in his collection, Aldrovandi wrote roughly 400 volumes on natural history. Getting the work published was tougher, though, and only a handful of his books were printed during his lifetime. When he bequeathed his collection to the Senate of Bologna, Aldrovandi stipulated that the senate should continue publishing his work. Fortunately, many of his manuscripts were published more or less how he envisioned. That approach was kind of a problem, notes science historian Florike Egmond. Aldrovandi apparently described specimens in the same order that they trickled into his collection. One volume, Egmond notes, contains "37 fish, 32 human monsters, 15 birds and 17 four-footed beasts, in that order." Though improbable at best, his illustrations were often visual treats. Like many of his time, he believed nature capable of creating her own works of art.

Aldrovandi embarked on a botanizing expedition in the Sibylline Mountains of Italy, in 1557, the first such expedition of its kind in Europe. Not surprisingly, he desperately wanted to see the New World, too, but by the time he was offered the opportunity, he was 65. He thought himself too old and frail to survive the trip, but he might have made it after all; he lived nearly 20 more years. When he did travel in later years, he was accompanied by assistants, including an artist to draw the sights and a secretary to record his observations.